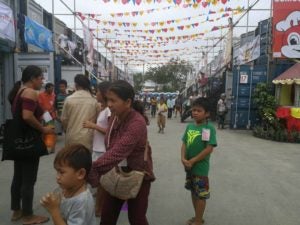 There will be less container vans provided to house out-of-town pilgrims for Devotee City in line with the Sinulog Festival 2019. / CDN Digital Photo by Morexette Marie B. Erram

CEBU CITY, Philippines – Officials in charge of the Devotee City have resorted to other means in making sure out-of-town pilgrims have a decent place to stay in Cebu City during the celebration of the Fiesta Señor.

During the official launching of the Devotee City on Friday, January 18, Cebu City Councilor Eugenio Gabuya Jr. said they installed tents to provide more space for the pilgrims.

This developed after they were only able to provide 58, 20-footer container vans that will house indigent pilgrims, mostly from the different towns of Cebu province.

Gabuya, chairman of the Devotee City Committee for the Sinulog Festival 2019, said they are expecting at least 3,000 individuals who will be staying in Devotee City, which is located in a vacant lot beside the Compania Maritima building near the South Road Properties (SRP).

“Each container van can accommodate up to 50 people inside. But we’re expecting more to come and seek shelter in Devotee City. That’s why we decided to put up tents,” said Gabuya.

He added that as of Friday, there are approximately 900 individuals who are now staying inside the Devotee City, whose soft opening was done last Thursday morning, January 17.

Last year, there were 120 container vans used to house more than 3,400 individuals.

Meanwhile, at least six tents, 27 portable toilets, and 10 shower rooms were installed in the site.

Medical and rescue teams, and police officers from the Cebu Provincial Police Office (CPPO) were also detailed in the area to ensure peace and order. bjo

Read Next
Politicos be warned: No tarps, no selfies, no riding on floats during Sinulog parade