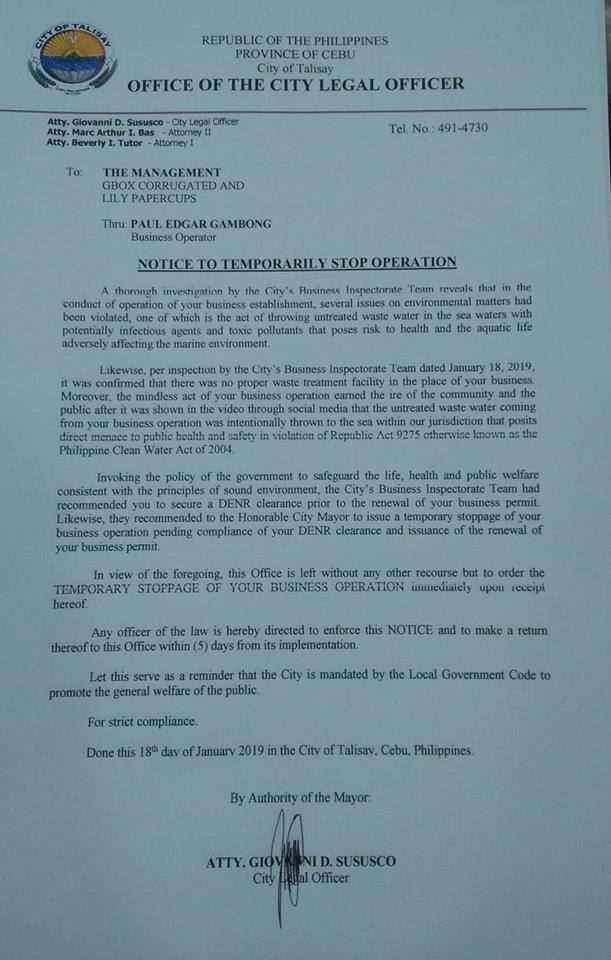 This is a copy of the cease and desist order enforced on the company where the “red water” discharged to the sea originated.|Photo courtesy of the Talisay City Public Information Office

CEBU CITY, Philippines — Authorities are now ordering for the temporary closure of a private firm found out to have been discharged red-colored water directly into the sea in Barangay Dumlog, Talisay City, which went viral over social media on Thursday (January 17).

Both the Talisay City Government and the Environmental Management Bureau in Central Visayas (EMB – 7) traced the water caught on the viral video to G-Box Corrugated Packaging, which is based on Sitio Litmon of Barangay Dumlog.

EMB – 7 will issue an interim Cease and Desist Order (CDO) while the local government of Talisay City will serve an order for the temporary stoppage of the firm’s operations.

“We will serve the temporary stoppage against the firm today. This means that their operations will temporarily halt until they can comply (with) all the necessary requirements prescribed by EMB – 7,” Dr. Jomar Rubio, executive secretary of Talisay City Mayor Eduardo Gullas Sr., told Cebu Daily News Digital in a phone interview on January 18.

According to EMB – 7’s investigation, the firm violated several provisions of the Philippine Clean Water Act for not having any wastewater treatment facility and a proper drainage system that prompted them to discharge it directly to the sea.

Their report stated that the water pumped out from the firm’s premises was hazardous wastewater generated from their inking and labelling area, which was accumulated rainwater since it lacked a drainage system.

“Since the establishment does not have a drainage system, rainwater accumulates in their premises. Thus, they accordingly have to pump out the water to the sea,” EMB – 7.

“The red color indicates that the rainwater was contaminated with water-based waste ink composed of organic pigments, acrylic resins, alcohol, water, and additives. It is considered as a hazardous waste pursuant to Republic Act 6969, otherwise known as the Toxic Substances and Hazardous and Nuclear Wastes Control Act of 1990, with hazardous waste number F603,” they added.

CDN Digital contacted GBox Corrugated Packaging but a staff, who requested to speak in anonymity due to lack of authority to speak, said no one was present to issue any comments as of press time.

State environmental officers also recommended on raising the matter before the Pollution Adjudication Board (PAB), the quasi-judicial body of the Department of Environment and Natural Resources (DENR) that decides on cases compiled by EMB.

They will also conduct a technical conference to discuss further on the matter, together with representatives of GBox Corrugated Packaging.

A video showing red-colored water being discharged directly into the seas of Barangay Dumlog, Talisay City made the rounds on social media last Thursday, prompting residents to seek the help of DENR./dbs