Garma: No throwing of giveaways, no umbrellas along parade route for next year’s Sinulog 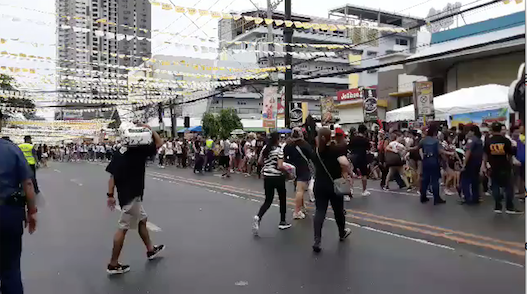 Some spectators are seen crossing General Maxilom Avenue in uptown Cebu City despite the appeal from police of stay off the street where contingents are to dance during the Sinulog grand parade on Sunday, Jan. 20, 2019. | Morexette Marie B. Erram

CEBU CITY, Philippines — No throwing of giveaways to spectators and no umbrellas for the public along the Sinulog Grand Parade route.

These are among the recommendations of Senior Superintendent Royina Garma to the Cebu City government and the Sinulog Foundation Inc. (SFI) for next year’s holding of the Sinulog.

Garma, Cebu City Police Office (CCPO) director, said that the city government should prohibit the throwing of giveaways from participants or contingents to the spectators.

She said that she noticed during the grand parade that spectators became unruly when celebrities on floats threw giveaways to the crowd along the parade route.

Garma also encouraged the local government unit (LGU) to pass an ordinance prohibiting contingents or participants from throwing giveaways to the crowd and to disqualify those who would violate the ordinance.

She also suggested that the Cebu City government should ban the public from bringing umbrellas during the parade because it would cause arguments among the spectators.

She said that umbrellas would block the view of spectators who would be  farther from the cordon line causing tensions to rise between them.

The CCPO chief also said that she would suggest to the city government to put up more portalets along the Sinulog route because people tend to the cross the cordon to search for a toilet.

She said that the commotion would cause a ripple effect, encouraging other people to cross the cordon line as well.

Garma also noticed the lack of signages around the Basilica compound and the Sinulog route especially for directions and locations of garbage disposal areas.

“We need to post it on places that are more visible,” she added.

Garma also said that she would also recommend for next year’s Sinulog celebration a stricter implementation of the identification card system, the purchase of more ropes and more gloves for the cordon guards, and having more areas in the parade route for the contingents to perform.

She said she was hoping that the Cebu City government and the Sinulog Foundation Inc. would also heed her recommendations for a more organized and peaceful Sinulog in 2020./dbs