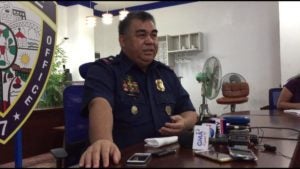 Chief Superintendent Debold Sinas, PRO-7 director, said they will do their best to accomplish the deadline set by their higher-ups. | CDN Digital photo Morexette Erram

Cebu City, Philippines – The Police Regional Office in Central Visayas (PRO-7) accepted the challenge to finish its investigation on the ambush of San Fernando Mayor Lakambini “Neneth” Reluya, and five others, in two weeks.

Albayalde instructed local police to solve the ambush within two weeks, otherwise the police investigators in charge will be fired.

Reluya survived the ambush on Tuesday night, January 22, 2019, but three of her five companions–Allan Bayot, Ricky Montenora, and Ricardo Reluya–didn’t.

Ricardo Reluya is the husband of Mayor Reluya, who is running for vice mayor in this year’s midterm election.  He also  the federation president of the Association of Barangay Councils (ABC) in San Fernando town. /bjo