INDIANAPOLIS — Stephen Curry scored 23 of his 26 points in the first half, DeMarcus Cousins added 22 and the Golden State Warriors extended the league’s longest winning streak this season to 11 with a 132-100 rout of the Indiana Pacers on Monday night (Tuesday morning, Philippine time). 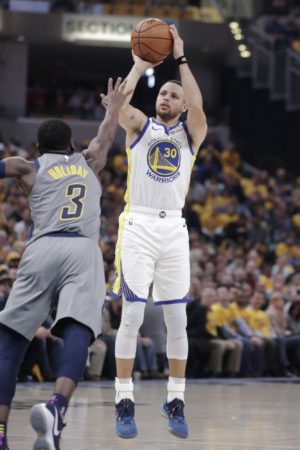 Kevin Durant had 16 points for the Warriors, who have won a league-best 10 consecutive road games and got their first sweep on a five-game road trip since November 2014. And Draymond Green didn’t even play.

Myles Turner scored 16 points and Bojan Bogdanovic had 15 but Indiana dropped its second straight since losing All-Star guard Victor Oladipo to a season-ending knee injury. The Pacers also played without Tyreke Evans, Oladipo’s replacement, because of a sore back.

But even at full strength, the Pacers would have had difficulty weathering the Warriors’ flurry.

Curry scored eight straight to break a 16-16 tie midway through the first quarter and Golden State never looked back. The Warriors closed the quarter on a 24-6 run to make it 40-22 against the league’s top scoring defense.

Indiana never got closer than 16 after the first quarter.

Read Next
Mother and son busted for illegal drugs