First-ever judiciary complex outside Luzon to rise at SRP 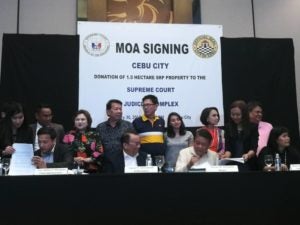 Cebu City, Philippines – The first-ever judiciary complex outside Luzon that will house trial courts, the appellate court of the Visayas, and administration offices of the Supreme Court (SC) will soon rise in the South Road Properties (SRP).

This developed after the SC and Cebu City Government signed a memorandum of understanding (MOU) that formalized the land-swap deal they entered.

Last November, the Cebu City Council unanimously approved a measure allowing the SC to swap its 7,000-square meter parcel of land at the SRP for a bigger one that has an area of 15,000 square meters owned by the city government.

Marquez told reporters in an interview that the SC has allocated P1 billion worth of funds for the construction of the judiciary complex. He added that the construction will begin as soon as the SC will be named as the new owner of the lot.

“We will start construction as soon as yung title na sa SC na. But mahaba-haba pa yung proseso so kasi we have to talk about its structural design and architecture,” he said.

Marquez said the SC is targeting for the complex to be completed between 2021 to 2024.

“We’re looking at three to five years from now,” he said. /bjo

Read Next
Police officer caught with ‘paltik’ in hot water