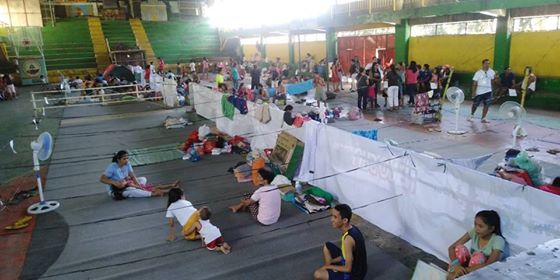 Over 60 of the 155 families were sheltered at the Pardo barangay gym after they were left homeless by a fire that razed 98 houses in Sitio Tabokanal in Barangay Pardo, Cebu City, on February 3. | Photo by Delta Dyrecka Letigio

CEBU CITY, Phiippines — Hygiene products and sleeping materials are needed by the 800 individuals displaced by the fire on Sunday, February 3 that destroyed 98 houses in Sitio Tabokanal in Barangay Pardo.

Pardo Barangay Captain Manolita Abarquez said on Monday, February 4, that she was appealing on the kind hearts of the public to donate these things that would be the immediate needs of the fire victims staying at the Pardo gymnasium.

The Pardo Barangay Chief made the call as the Pardo Barangay Council considered tapping into the leftover barangay calamity fund budget of 2018 since the barangay’s budget for 2019 had not yet been approved by the Cebu City Council.

Abarquez said that she had asked the barangay treasurer to coordinate with the city government on how to go about on tapping the P441,000 for the fire victims.

She also said that they were working on complying with the new requirements to have their 2019 barangay budget approved.

Abarquez said that they hope to use the funds to provide housing materials to the 155 families left homeless from the fire as an additional aid aside from the one given by the city government to the victims.

Abarquez said that the barangay was able to easily provide for the needs of the victims including food and shelter.

She also said that she would be suggesting to the city government to reblock the fire hit area in Tabokanal to avoid future fires from spreading easily.

Abarquez said that reblocking the area would mean a little sacrifice on the part of the residents but it would be a price to pay for safety.

She  said she would expect most residents to be allowed to rebuild on the same lots as most of them had been renting the lots from the owner.

However, she said, not all owners had been given a go signal to rebuild their houses.

Abarquez said that the owner of the lots would have the discretion to allow the previous residents to rebuild and she would hope for an amicable settlement between these owners and the now-homeless residents./dbs

Read Next
With Alas’ injury, Cebuano Tallo ready to step up