In an interview with reporters, Senior Superintendent Remus Medina, chief of the Regional Intelligence Division of the Police Regional Office in Central Visayas (PRO-7 RID), said they already identified the clubs where peddlers of ecstasy, a notorious party drug, frequent. 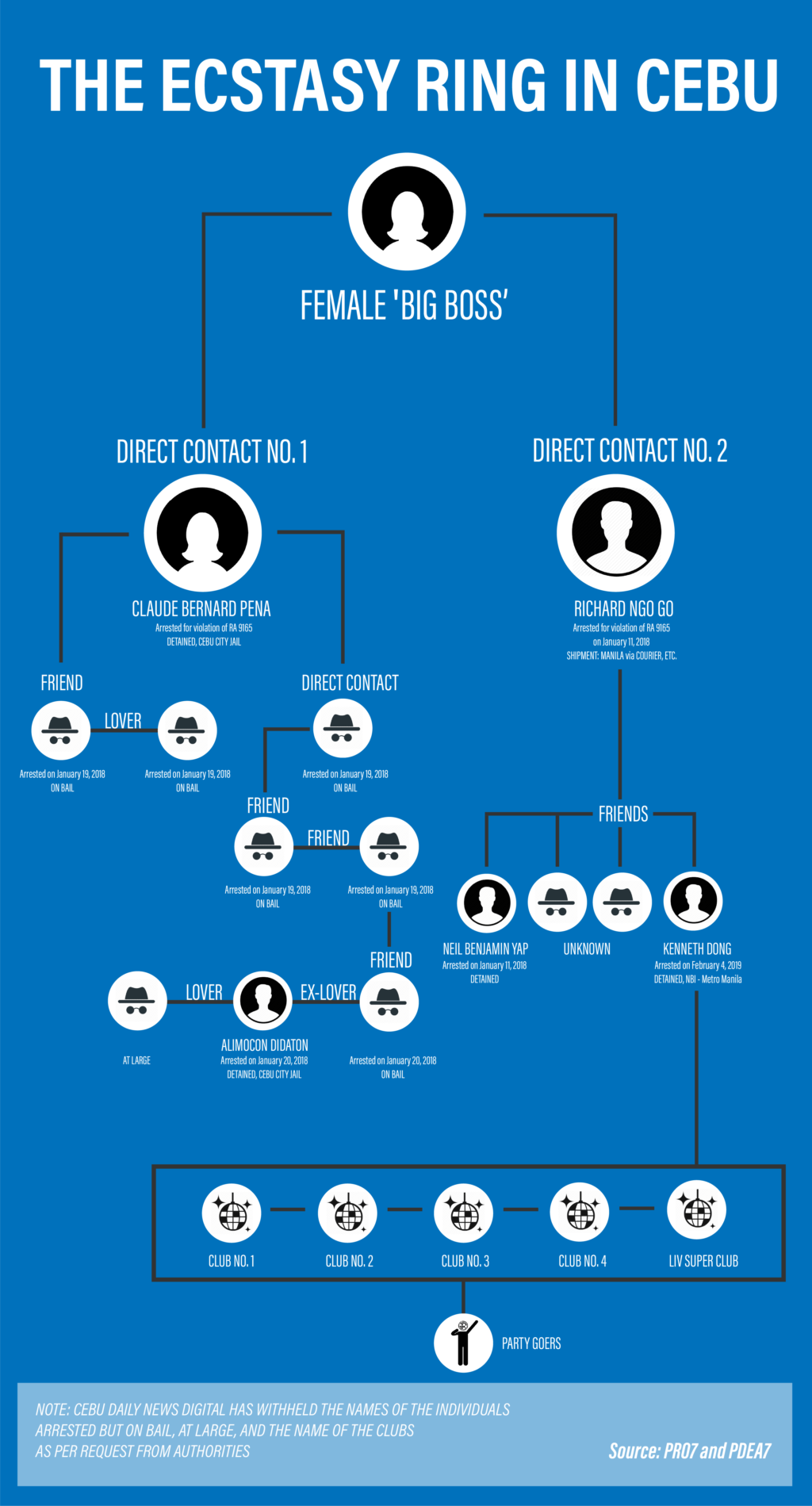 This is a revised layout of the Ecstasy Ring Matrix formulated by PRO -7 and PDEA – 7. Members of the media were furnished a copy of the so-called matrix following the death of a young woman during a pre-Sinulog concert after she reportedly ingested ecstasy. | CDN Digital Graphics by Morexette Marie B. Erram

However, he refused to divulge the names of these clubs and bars so as not to preempt follow-up operations by the police.

The ‘ecstasy ring’ matrix was formulated by the PRO-7 and the Philippine Drug Enforcement Agency in Central Visayas (PDEA-7) and serves as a guide in tracing the source of these illegal drugs.

A copy of the matrix was furnished to members of the media on Tuesday, February 12, 2019. But authorities requested not to disclose the names of people arrested and on bail, and those who are still ‘at large.’

One of the clubs mentioned in the matrix was LIV Superclub, located at the North Reclamation Area in Mandaue City, which was operated and owned by Kenneth Dong.

Dong was arrested last February 4, 2019 in Metro Manila for his alleged involvement in the smuggling of P6.4-billion worth of shabu in 2017.

“Now that Dong is arrested, one of the suspected bars na may pumapasok (na ecstasy) is yung LIV. Binabantayan din natin yan but no, we cannot close the bar. The police have no authority in doing so,” Medina added.

The matrix also identified a female ‘big boss’ whom authorities suspected as the primary source of ecstasy in Cebu. It also showed at least 14 more suspects, wherein five of them, including Dong, were already arrested and detained.

Six of them, whose identities will not be disclosed as per request from authorities, were arrested last January 2018 for violation of the Comprehensive Dangerous Drugs Act (Republic Act No. 9165) but managed to post bail.

One remained at large while investigators are still determining the identities of two more individuals,

Medina said the matrix was formed based on the information they got from the suspects arrested. /bmjo