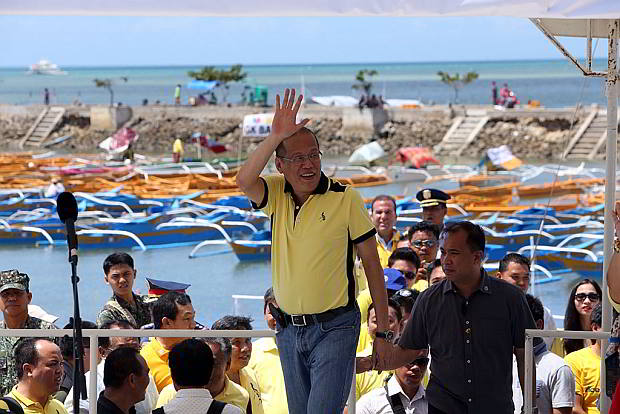 President Aquino acknowledges the crowd as he arrives at the Bantayan wharf yesterday during his visit in Bantayan island for his turn-over of 5 million pesos cash for work check. (CDN PHOTO/LITO TECSON)

Expect heads to roll in the coming days as the President’s patience is wearing thin over the seemingly disjointed efforts, particularly at the local level, to help victims of disasters since December 2012.

President Aquino yesterday appealed for more patience from disaster victims amid the overwhelming challenges confronting his administration in the aftermath of back-to-back calamities that overshadowed the sterling economic growth under his watch.

“Now, let me say this again, the problem is enormous. More than half of our provinces were affected-and I think the government demonstrated that we may not have been perfect, and I’ll admit that, but to say that we didn’t exercise a maximum effort, that’s a bit of a stretch,” he told reporters in Cebu City.

In a clear warning to some officials he did not identify by name, Mr. Aquino gave them until next week to comply.

He noted that supertyphoon Yolanda alone, the strongest storm to ever hit land, affected 44 of the Philippines’ 81 provinces, leaving the government with the Herculean task of taking care of 16 million Filipinos.

But the President could not hide his exasperation over the pace of rehabilitation efforts in some areas.

The President blew his top when Sun Star reporter Oscar Pineda mustered the courage to ask about the apparently inadequate support for typhoon victims and the snail-paced rehabilitation efforts in northern Cebu.

Pineda, who was the only Cebu-based journalist allowed to shoot a question during the press briefing, told of a growing restiveness among typhoon victims who felt neglected by the national government three months after Yolanda hit northern Cebu.

He said the reporter could just get all the data of government’s relief efforts from Social Welfare Secretary Dinky Soliman, but later decided to talk lengthily on what his administration has done, thus far, to help the victims get back on their feet.

Questioning the veracity of the reporter’s assertion, he said, “Well, I hope you have details (on the particular) place, so that I can answer directly.”

“And, if you want to, you can come with us to Bantayan. We’ll see if they hate us,” he added.

To begin with, he said, Yolanda affected some “three million plus families,” or “16 million people.”  He asked if “someone could still surpass what we have done” to “physically (help) 44 of our 81 provinces” in a country visited by at least 20 typhoons yearly. 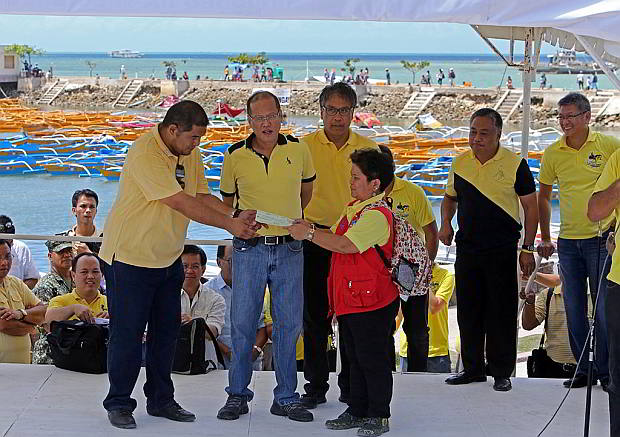 The President said the “funds are ready” but the government was still in the process of verifying the proposals submitted by local government units (LGUs).

“We have prepared a program to help rebuild municipal (halls) aside from other infrastructures such as (public) markets. Of course, (rebuilding) roads, bridges and restoration of electricity (is automatic),” he said.

He explained that requests for repair and or construction of a new gymnasium, evacuation center or basketball court should follow the concept of “build-back-better.”

Mr. Aquino then appealed to the media to “highlight” positive developments, noting that some stories about the pace of reconstruction efforts were not accurate.

Rehabilitation czar, Secretary Panfilo Lacson, said plans are in place to channel rehabilitation funds from the national government directly to the towns and cities affected by supertyphoon “Yolanda.”

Lacson said they decided to make the recommendation to the President to speed up the reconstruction work following complaints from north Cebu town mayors that they have yet to feel the presence of the national government three months after Yolanda.

A draft memorandum has been submitted to the President two days ago, he said.

“Since the post disaster needs assessment (PDNA) is taking long, we’re going down to the lower levels, bottoms up approach and coordinate with the local government units,” Lacson said yesterday at the Capitol.

“They will implement the plan themselves because if not, we will just continue to wait and not accomplish anything,” he added.