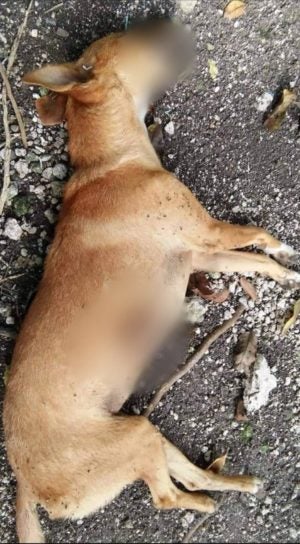 This photo posted by netizen Jerwin Cameros on February 17, 2019 shows a lifeless dog with a gunshot wound to his body.

Cebu City, Philippines – A photo of a lifeless dog allegedly shot by a policeman in Santander town, southern Cebu is making rounds on social media.

The photo posted by netizen Jerwin Cameros on February 17, 2019 showed a dog with a gunshot wound to its body.

The dog belonged to Cameros’ cousin, Jenelyn Russiana, from Barangay Talisay in Santander.

In an interview with Cebu Daily News Digital, Russiana, 27, said she and the camp of the police officer who shot her dog have already settled the matter amicably.

Russiana identified the cop as PO2 Richard Cavalida of the Santander Police Station.

According to Russiana, the incident happened on Sunday afternoon, February 17, 2019, when her dog, a mixed-breed named Daisy, broke free from her leash and entered the property of Junie Cavalida, the older brother of Richard.

Russiana said that based on the explanation of Richard, the dog allegedly tried to attack the policeman while on the property of the Cavalidas, which prompted him to shoot the canine.

Russiana said Richard, accompanied by Santander Police Station OIC SPO4 Fermo Gallarde, went to her house later that night to explain his side and settle the matter amicably.

Gallarde, when sought for comment, said he immediately called Richard after the incident to shed light on what happened. He also confirmed that he accompanied the policeman to the house of the dog’s owner on Sunday night to help both sides settle the matter.

Gallarde added that he advised Richard to face whatever complaints will come from Russiana should she decide to file one.

CDN Digital tried to get the side of Richard Cavalida but he was still on duty on the field at press time. /bmjo