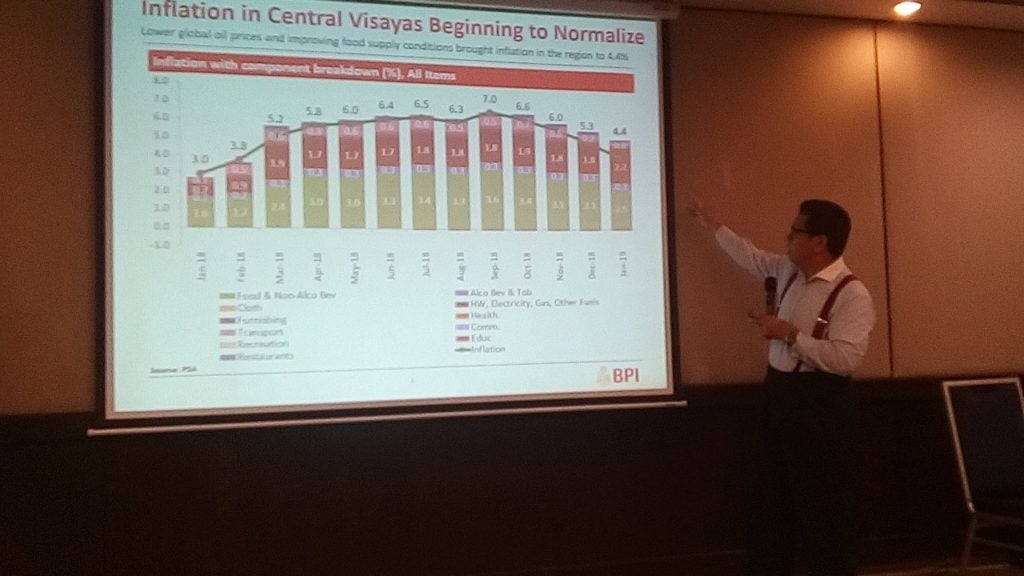 CEBU CITY—The Philippine economy is expected to improve this year, according to Emilio “Jun” Neri, lead economist of the Bank of the Philippine Islands (BPI).

“With the inflation rate in a downtrend, the economy has the opportunity to return to the sweet spot of low-inflation and high growth, just as election spending boosts overall demand,” Neri said.

He added that the inflation rate would return to the two percent to four percent target this year due to the projected stable global oil prices.

Last year, inflation surged to a 9-year high at 5.2 percent, much higher than the 2.9-percent inflation in 2017.  The increase in inflation was brought about largely by higher global oil prices, food supply problems and the weaker peso.

The additional excise taxes imposed under the Train law also contributed to the higher inflation rate.

Central Visayas’ growth, however, was lower than the national average last year at 5.3 percent. Neri explained that this was due to the high base of 8.8 percent growth in 2017.

The region’s inflation is starting to normalize, from 5.3 percent in December last year to 4.4 percent in January this year.

Agriculture and manufacturing were the major sources of the growth slowdown, Neri said. This was due to the higher fuel and input costs, caused largely by surging global oil prices and the implementation of excise taxes under the Train 1.

According to Neri, the country’s economy will grow by at least 6.5 percent in 2019 due to sustained surge in capital goods spending.

The growth in the gross domestic product would accelerate further due to recovery of household spending and the overall spending activity resulting from the midterm elections in May, he added.

Meanwhile, the services sector, led by financial and trade sectors, is expected to post the strongest growth on the production side in 2019.

However, Neri cautioned against the growing trade gap vis-à-vis the cash remittances.

He also noted that the risks posed by the trade tensions between the US and China as well as the sizeable US stock market decline could negatively impact on the country’s economy.

However, Neri projects a slowdown in the growth of national government deficit, the softening of the peso and the further decline of the long term interest rates.

Also, he noted that the peso would weaken further due to hefty capital spending while production would improve as costs normalize./dcb