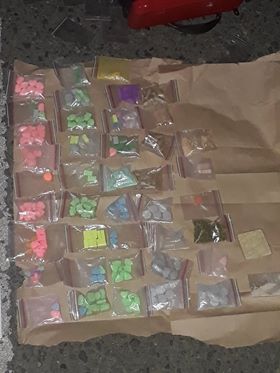 These are the party drugs recovered from the car of Ken Kenneth Rosales, suspected party drugs supplier, who was killed in a police operation in Barangay Zapatera, Cebu City on February 22. |CDNDigital file photo

CEBU CITY, Philippines — The ecstasy tablet reportedly handed to Ashley Abad may have come from Ken Kenneth Rosales, a suspected party drugs supplier who died in a dawn econunter with police in Barangay Zapatera, Cebu City.

Senior Superintendent Remus Medina, Police Regional Office in Central Visayas Regional Intelligence Division (PRO-7 RID), said that they were not discounting the possibility that the ecstasy ingested by Abad while attending a pre-Sinulog concert last January could have come from Rosales.

However, Medina said they had yet to establish a direct connection between the ecstasy found in Abad and those confiscated from Rosales on Friday dawn, February 22.

Abad collapsed while attending a concert last January 19 held at Cebu Business Park but died a day later in a hospital.

Police confirmed that her death was due to an overdose of ecstasy.

Meanwhile, Rosales, 31, died after engaging in a shootout operatives from the Regional Special Operations Group in Central Visayas (RSOG-7) and the Parian Police Precinct.

Several ecstasy tablets and other party drugs were confiscated by authorities from Rosales’ vehicle./dbs