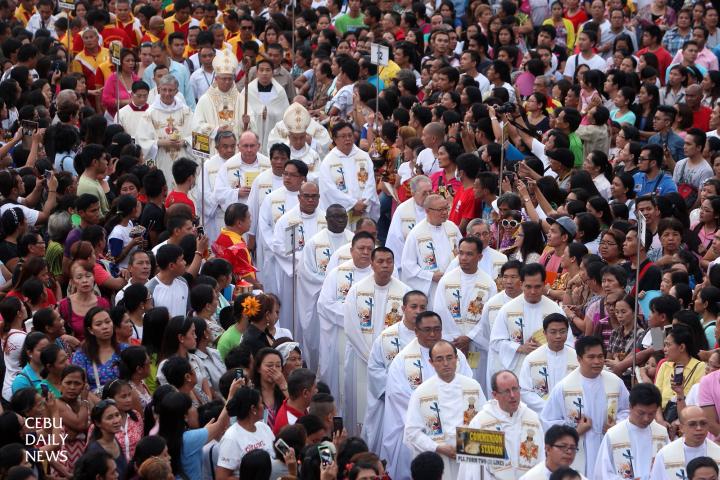 Archbishop Jose Palma and priests head for the altar as they celebrate one of the Masses to mark the Kaplag in August 2018 at the Basilica Sto. Niño de Cebu.| CDN file photo

CEBU CITY, Philippines — Cebu Archbishop Jose Palma revealed that there would be major reshuffling among the Archdiocesan parishes and the assigned priests soon.

Palma said on Saturday, March 9, that the reshuffling was being considered by the Archdiocese’s Personnel Board on the assignment of seminary and parish priests.

“Daghan na kaayo silag meetings, and all aspects of our Archdiocesan lives have been considered,” said Palma.

The prelate added that the key positions of the Archdiocesan Commissions had already been filled up and the parishes would follow.

He said that the parishes might be the most affected since he believed that it was high time for the reassignment of these priests after serving some time in their parishes.

“It will happen soon, maybe, in the middle of the year, it will come,” he added.

The archbishop did not divulge the reasons behind the reshuffling of parish priests and if it was connected to the recent legal problems some priests were facing.

On Friday,  the family of a 17-year-old girl reported to the police and to the National Bureau of Investigation (NBI) that the girl was allegedly molested by a priest in her hometown in Dumanjug, a town 73 km south of Cebu City.

The priest was relieved by Palma immediately after the incident was reported, and the Archdiocese had reached out to the aggrieved family.

However, Palma was tightlipped on the location of the priest.

In December 2018, another priest was also placed on hot seat for allegedly hitting a 15-year-old mentally-challenged girl for not feeding the priest’s dog.

The priest was also relieved from his post. Police also filed charges for violation of RA 7610 or the Special Protection of Children Against Abuse, Exploitation and Discrimination Act. The priest, posted, an P80,000 bail.

Palma said that no cases had been filed yet by the family of the 15-year-old girl or the police, and the relieved priest was still waiting for the results of the investigations./dbs