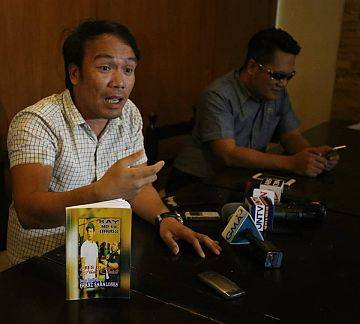 In this photo dated March 10, 2017, San Fernando Vice Mayor Fralz Sabalones answers questions from the media regarding the alleged involvement of his brother, Franz Sabalones in the drug trade. /CDN File Photo

SAN FERNANDO, Cebu, Philippines–Fralz Sabalones is now nowhere to be seen in his office or anywhere near the Sangguniang Bayan of San Fernando town where he serves as vice mayor and presiding officer of the municipal council.

Sabalones has been named by President Rodrigo Duterte as one of the narco-politicians in the most recent narcolist released on Thursday night, March 14.

Salabones was also named in the narcolist released by the President in 2016 but his brother, Franz Sabalones, later surfaced and confessed that it was him who was involved in illegal drugs and surrendered to then Philippine National Police chief Ronald dela Rosa.  Franz has however since disappeared amid allegations that he remained involved in the drug trade.

Even before the new list was revealed by the President, Vice Mayor Sabalones has likewise made himself scarce. He filed a terminal leave of absence from March 3, 2019 up to the end of his term on June 30, 2019. The. leave application was approved by Mayor Lakambini “Neneth” Reluya.

According to the Sangguniang Bayan acting secretary, Carlina Montez, Sabalones had been filing leaves of absences every Monday since July 30 last year, and the first councilor, Eugema Bacalla, has been presiding over the council’s sessions in his absence.

Since July 2018, Sabalones has been holding office elsewhere that none of the SB staff seemed to know the location. They presumed he worked at home.

“He functions all the other days of the week, except on Mondays. One of his staff takes documents for him and they return them already signed,” said Montez.

Montez said she has heard of the vice mayor’s alleged involvement in illegal drugs together with his brother, Franz, but as municipal employees, they just do their jobs at the municipal government and they try to steer out of the drug controversies involving the Salabones brothers.

Montez said Sabalones had been going on leaves because of his hypertension, chest pains, and constant dizziness.

Prior to his terminal leave, Sabalones also went on a 30-day leave after Mayor Lakambini “Neneth” Reluya was ambushed in January. The leave was approved by Governor Hilario Davide III in the absence of Reluya.

The mayor was wounded but survived the attack believed to be perpetrated by hired assassins. However, her husband, Councilor Ricardo “Nonoy” Reluya, the president of the Association of Barangay Councils (ABC) in San Fernando, died in the attack along with two other municipal employees, driver Allan Bayot and municipal investment officer Ricky Monterona.

With Reluya in the hospital and Sabalones on leave,  Bacalla took the post as the town’s acting mayor.

San Fernando’s Human Resource Office head, Francis Cabigon, said Sabalones will no longer be receiving any salary for the duration of his terminal leave  since he has used up all his leave credits.

Cabigon said they are no longer expecting him to show up at the municipal hall.

Cebu Daily News Digital tried to reach Mayor Reluya but failed to get an answer.

Chief Inspector Lymel Pasquin, the San Fernando police chief, said they also do not have any idea where the vice mayor is.

Although administrative charges of grave misconduct, conduct prejudicial to the best interest of the service, conduct unbecoming of a public officer, and gross neglect of duty have been filed by the Department of Interior and Local Government (DILG) against  Sabalones and the other so-called  ‘narcopoliticians,’  there has been no directive to arrest them.

Pasquin said they are closely monitoring the town’s illegal drugs movement even before the release of narcolist.

However, the vice mayor has been very elusive, he said.

“When I was assigned here on January 12, he was already gone,” said Pasquin.

Pasquin hoped that despite the release of the narcolist, the town will remain peaceful especially during the upcoming midterm elections in May. /elb