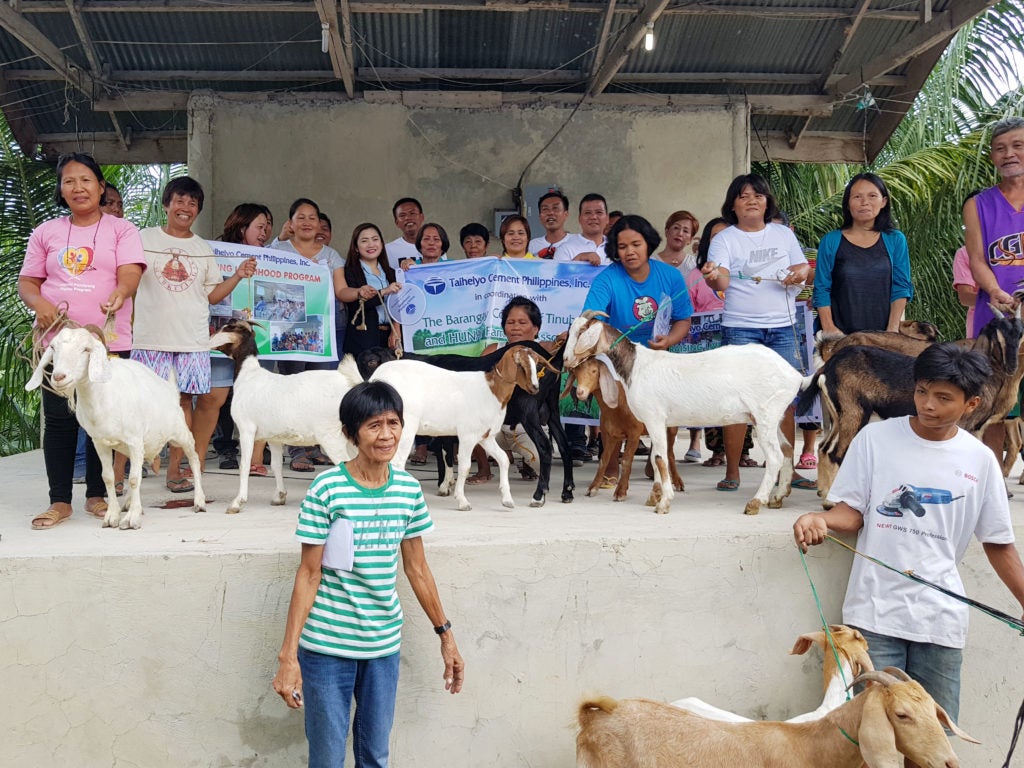 CEBU CITY, Philippines – Two years after Hunat Farmers Association (HFA) started raising goats for livelihood through the dispersal of offspring, 11 more members were added to the first batch of six members coming from the hinterlands of Tinubdan in San Fernando, Cebu.

HFA president Neria Canoy turned over the livestock to the new batch of beneficiaries recently at the Tinubdan community stage in the presence of Barangay Captain Dioscoro Pacquiao, Barangay Councilors and Municipal Agriculturist Nelson Soronio.

Over 40 card-bearing members witnessed the ceremonies, eager to already start their turn of raising goats.

In his message, Soronio urged the farmers to take good care of the goats and comply with requirements of the program, “a rare opportunity you have been blessed with.”  He also hinted of the Cebu Provincial Government plan to also establish a goat meat processing facility in the adjacent Naga City.

Pacquiao thanked TCPI for its continued support while he vowed to collaborate with the company in the interest of public service and the economic amelioration of his constituents.

Canoy promised to ensure that her members take good care of the goats, and produce offspring for more members to benefit from.

They were accompanied by their immediate past presidents Angelita Rita, Josephine Patambag, Elizabeth Remonida, Guillerma Sasil and vice presidents Ruthgilda Saura and Erlinda Presores during the turnover ceremony.

TCPI provided the bucks to mate with the does to bear some offspring. Each of the farmer will fully own the doe if one gets to turnover two does four to five months from kidding to HFA for further dispersal, said Bongcawil.

“They will then own all kids the original doe will further bear,” she said.

“They can raise these goats to expand their herd, for their own consumption, or to sell in the market.”

TCPI funded the project under its Social Development Management Program (SDMP) with a commitment by HFA member-beneficiaries to provide forage and house shed for the goats.

Previously, the company provided the same assistance to Sitio Suico Farmers Association (SSFA) in Barangay Tonggo with 12 goats, a spin-off from a 4-year project TCPI undertook in Bugho that started in mid-2009.

TCPI provides the medicines and vitamins for the goats and works with the municipal agriculturist to conduct visits to the livestock for immunization and to look into its health concerns./dcb