Central Visayas was strike-free during 1st quarter of 2019 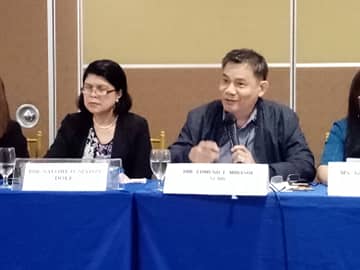 National Conciliation and Mediation Board Director Edmundo Mirasol (right) says he expects Region 7 to remain strike free at the end of the first quarter this year. At his left is Regional Director Salome Siaton of the Department of Labor and Employment. /Irene R. Sino Cruz

CEBU CITY, Philippines–Not a single labor strike was reported in Central Visayas during the first quarter of 2019.

National Conciliation and Mediation Board (NCMB) Director Edmund Mirasol made this statement during a press conference organized by the Department of Labor and Employment in the region (Dole-7) held on Tuesday, March 26.

“From January until today, Region VII is strike-free,” Mirasol said.

He explained that they do not foresee any labor problems in the region since there are no critical issues here.

As part of their efforts, the NCMB regional office together with Regional Tripartite Wages and Productivity Board (RTWPB), and Employees Compensation Commission (ECC) promoted the labor management cooperation convergence framework in some areas in the region.

So far, these agencies conducted convergence seminars in Camotes Island, Bantayan Island and Bogo City during the first two weeks of March.

Last year, these activities were conducted in Malapascua Island, San Remegio, Moalboal, Lapu-Lapu City and Cebu City in Cebu province; Tagbilaran City and Talibon and Dauin towns in Bohol; and the cities of Dumaguete, Bayawan and Tanjay in Negros Oriental.

The LMC structure will serve as a guide for establishments to remain labor law compliant.

“We will continue to intensify our program promotions to unsaturated areas in the region because we want to spread the awareness and the benefits of the programs to both the employees and employer,” Mirasol added. /dcb