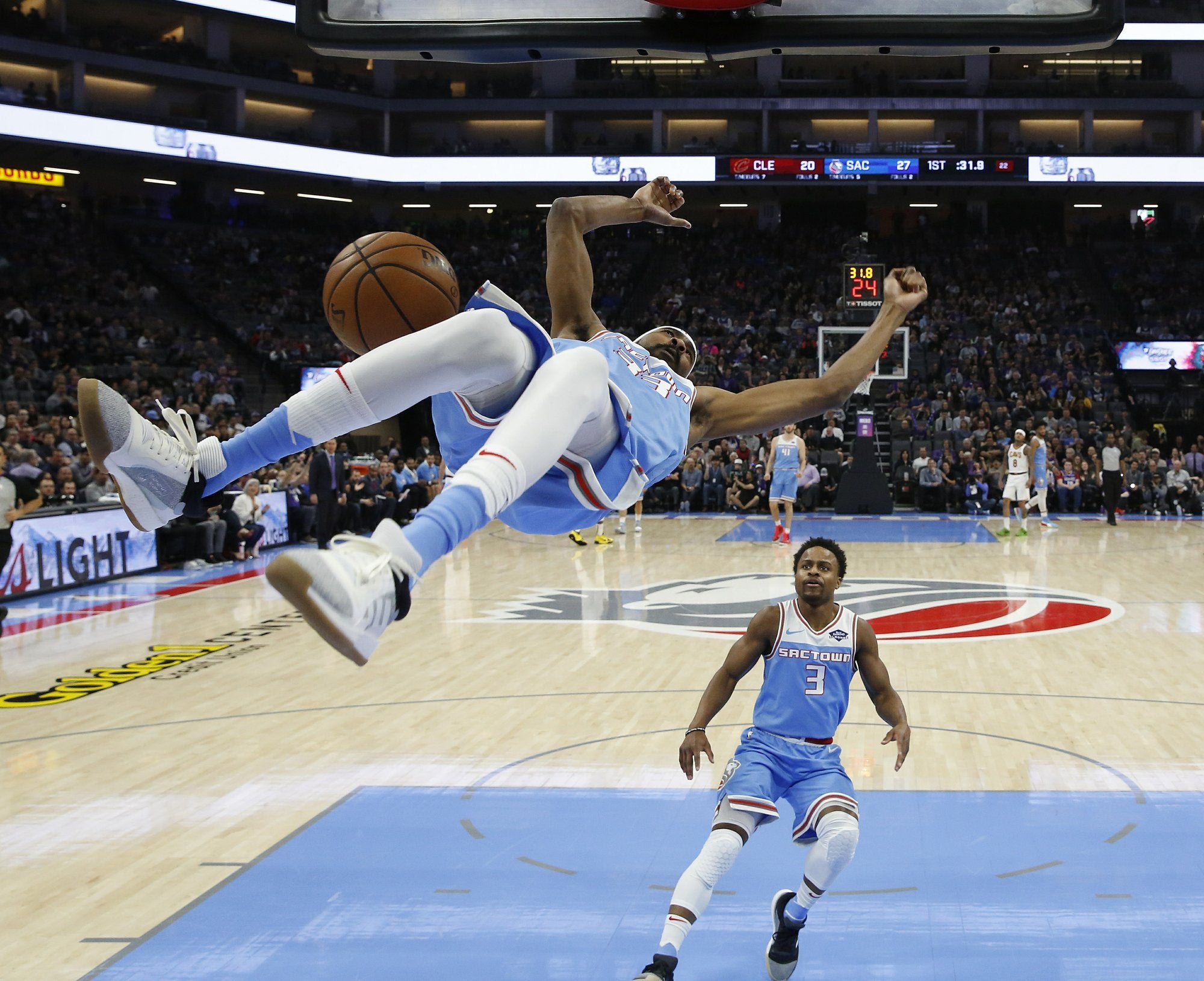 Sacramento’s Corey Brewer falls after a dunk in a game against Cleveland. | AP photo

“That’s a good win for us,” Sacramento coach Dave Joerger said. “The difference was our defensive activity at times was really good. We got deflections. We got steals. We forced them into turnovers.”

Definite positives for a young Kings team that was eliminated from playoff contention last week.

Another bright spot has been Hield’s 3-point shooting. He set the Kings’ single-season record earlier this season and needs six more 3s to break Damian Lillard’s NBA record for most in a player’s first three seasons. Lillard, Portland’s All-Star point guard, made 599.

“I wanted to break it tonight,” said Hield, who shot 5 of 11 from long range. “I’m blessed. A kid from the Bahamas, I never thought in a million years that I would be doing this. I mean, I thought I would be doing this, but to be here on the highest level of basketball, it’s a great accomplishment.”

With all his success shooting, Hield struggled handling with a mop, when he tried to assist a ball boy in freeing a ball that was stuck atop the backboard. It took Hield two jabs with the mop before the ball popped out — but not before Hield suffered a minor injury.

Marvin Bagley III scored seven of his 15 points in the fourth quarter, and Bogdan Bogdanovic added 15 points and eight rebounds for Sacramento.

Collin Sexton scored 19 points and joined LeBron James and Ron Harper as the only Cavaliers rookies to score 1,300 points. Sexton is the 10th rookie in the NBA to reach the milestone.

Ante Zizic had 14 points and 10 rebounds, and Larry Nance Jr. added 11 points and 16 boards for Cleveland, which committed 20 turnovers.

“In this building, against the number one fast break team in the league, you cannot turn the basketball over,” Cleveland coach Larry Drew said. “We were still right there in a good position but at the end, their size kind of caught up with us.”

Coming off a 130-105 loss to Houston on Tuesday, Sacramento (39-40) never trailed and led by as many as 15 points in completing a season sweep of Cleveland.

The Kings led 101-95 and then pulled away with a 9-0 run. Bogdanovic started it with a 17-foot jumper and Bagley followed with a 3-pointer and dunk. Kosta Koufas’ 12-foot floater put Sacramento ahead by 15.

Cleveland made a final push and closed within 110-100 on a bucket by Zizic, but Fox made a long jumper and Hield added a 3-pointer.