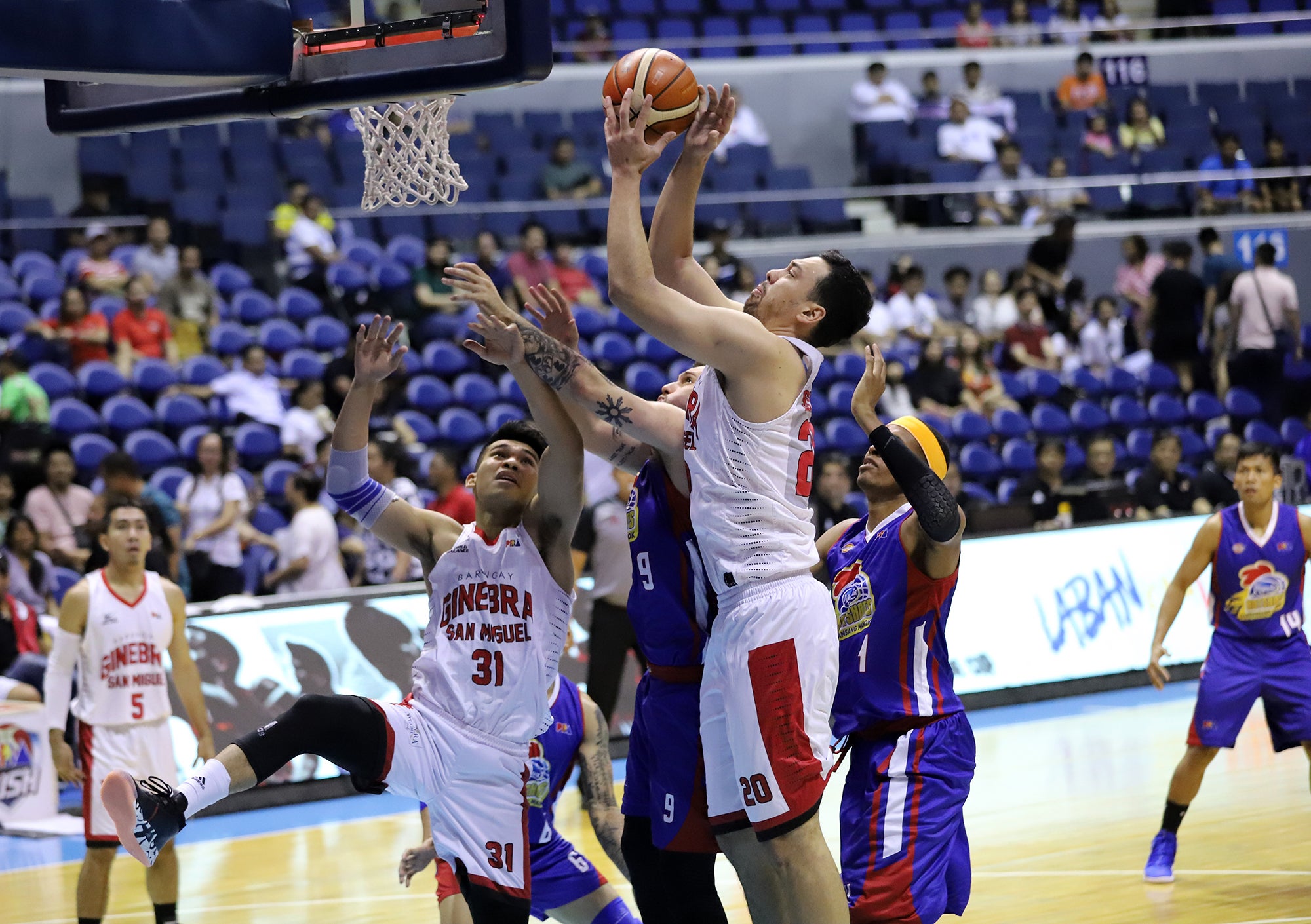 Cebuano Greg Slaughter of Ginebra goes for a putback in this quarterfinal game against Magnolia on Monday night, April 8, 2019. contributed photo | PBA Images

Magnolia’s Mark Barroca and Jio Jalalon told Chito Victolero that they’ll make up for a lackluster Game 1 while getting ready to face Barangay Ginebra in a no-tomorrow match for the Hotshots on Monday night.

The dynamic point guards proved that they can walk their talk.

Jalalon scored 17 points and Barroca accounted for 13 as they led the Hotshots to a 106-77 ripping of the Gin Kings at Smart Araneta Coliseum to forge a deciding Game 3 in their PBA Philippine Cup quarterfinal duel.

“They told me Sunday (after an 86-75 loss) that they will go all out in this game. And I’m thankful and proud that those two guys played the games true to their promise,” Victolero said in Filipino as he and his Hotshots gathered the needed momentum—and confidence—for the you-or-me match set Wednesday also at the fabled Big Dome.

TNT kept its composure behind chief gunner Jayson Castro and held off four-time defending champion San Miguel Beer, 93-88, in the nightcap, to also force a Game 3 on Wednesday.

Castro finished with 19 points and nine assists, helping the KaTropa in the stretch together with Troy Rosario and RR Pogoy.

Ian Sangalang scored 21 points to lead the Hotshots, and together with Jalalon and Barroca formed a three-cornered battering ram that chopped down the hulking Gin Kings to size.

Jalalon and Barroca, incidentally, combined for just seven points in the series-opening loss.

The Hotshots made use of a blistering 11-0 start that kept the Kings at bay the rest of the way.

Magnolia’s largest lead came up to 31 late in the final quarter.

“The most important thing here was our mind-set: That we needed to go all out,” Victolero said. “This is exactly what we had hoped for—a chance to compete.”

Sol Mercado scored 13 for third-ranked Ginebra, who was so out of sorts that it stood as the team-best total in the rout.

Ginebra’s imposing frontline of Greg Slaughter and Japeth Aguilar settled for just five points each following a pair of double-doubles in the series opener.

“This is a short series,” Victolero said. “We’ll just have to prepare well and just hope the breaks of the next game go our way.”

“But I’m liking our chances. We were able to tie it now,” he added.  “With the same level of effort and desire, I think we have a chance.”