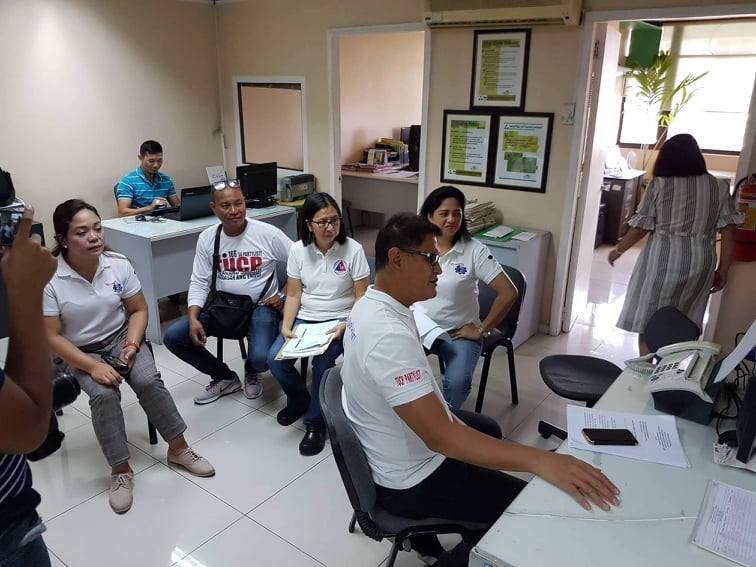 TUCP Representative Raymond Mendoza (right) led the filing of the union’s petition for a P386 wage increase before the Regional Tripartite Wages and Productivity Board in Central Visayas (RTWPB-7) past 9 a.m. today, May 7. /Gerard Vincent Francisco

The Associated Labor Union-Trade Union Congress of the Philippines (ALU-TUCP) used the argument to justify their petition for a  P386 wage hike.

TUCP Representative Raymond Mendoza and regional officials of the labor union filed their petition for a wage hike before the Regional Tripartite Wages and Productivity Board in Central Visayas (RTWPB-7) past 9 a.m. today, May 7.

The Cebu Labor Coalition also filed on Thursday, May 2, a separate petition for a P360.50 wage hike before RTWPB-7.

Mendoza said in a press conference held after he filed their wage hike petition before RTWPB-7 that the P386 across the board increase is needed to combat the glaring poverty and hunger that is now affecting the workers.

Citing the Philippine Statistics Authority’s (PSA) poverty threshold report in 2018, TUCP argues that an allocation of P9.60 per person per meal creates not only mediocrity but also puts the health of workers and their families in jeopardy.

“TUCP is raising the issue of workers’ nourishment as this has not been given attention as a glaring evident consequence of the supervening conditions,” the TUCP official statement reads.

Mendoza also shrugged off speculations that businesses would close if a higher wage is imposed in the region.

Eva Arcos, TUCP national vice president for education, said that while government labor officials say that their petition is a “suntok sa buwan” and “suntok sa Mars,” they continue to hope that the wage board will listen to the appeal of the workers.

Arcos added that the lowering of the inflation rate on basic commodities is not an excuse for them not to file for a new wage hike petition because cost of living in the region has remained high.

With the urgent need to give workers an improved living condition, ALU-TUCP opted to seek another round of wage hike this year.

The labor law prohibits the filing of wage hike petitions within a period of one year from the issuance of the last wage order unless petitioners are able to establish a supervening condition that calls for the needed increase.

“What kind of labor force will we have if they have this kind of budget? Hindi pa ba supervening condition ang kagutoman?” Arcos said./dcb