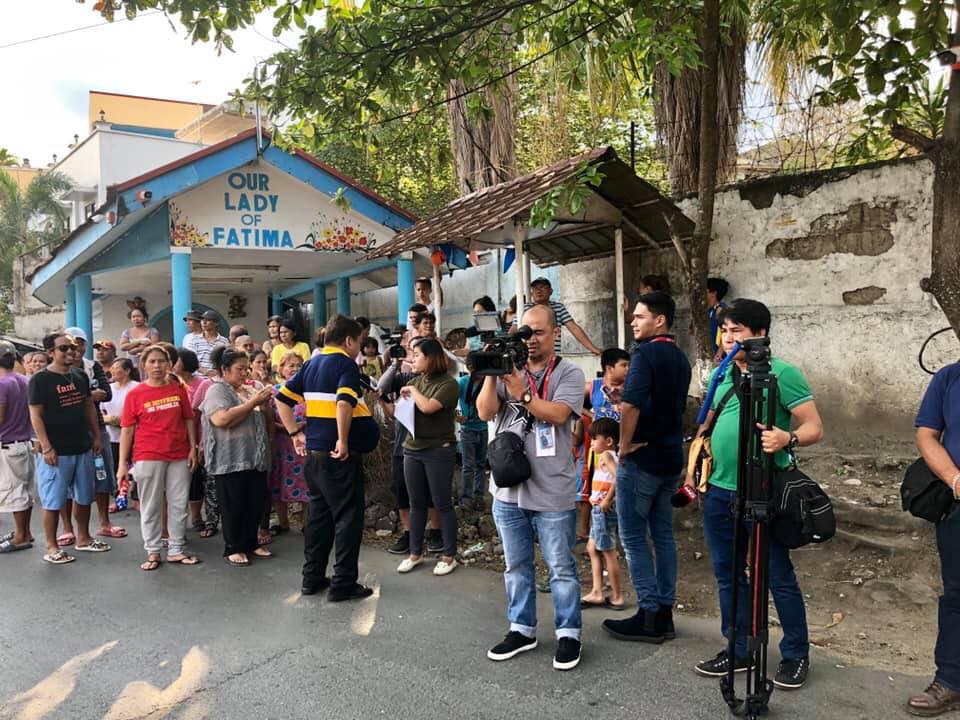 Cebu City Mayor Tomas Osmeña addresses supporters and members of the broadcast media at the Our Lady of Fatima chapel across his home in Barangay Guadalupe. | Photo grabbed from Tommy Osmeña facebook page

CEBU CITY, Philippines — A group of policemen inside a patrol car parking outside the house of Mayor Tomas Osmeña in Barangay Guadalupe, alarmed the supporters of the mayor prompting them to stand guard at the chapel across the mayor’s house.

Nelia Lopez, 51, one of the avid supporters of Osmeña, said that ever since the alleged threats allegedly perpetrated by the police against supporters of the Bando Osmeña-Pundok Kauswagan (BO-PK), they have been wary of the police.

The first the time a checkpoint was conducted outside the home of Osmeña on Holy Thursday, May 17, Lopez and her neighbors gathered at the chapel to watch over the house of Osmeña.

Lopez said they had been watchful since that day for another checkpoint or police presence in the area.

She said they believed the police wanted to intimidate the mayor and his family to allegedly scare him for the May 13 elections, the way they allegedly did to other BO-PK supporters in the mountain barangays.

Lopez said their presence would serve to be both witnesses and guards to whatever the police might do to the mayor and his family although they did not believe the police would do anything more than scare them.

“Basta naa lang mi diri. Supporta lang gyod ming mayor. Di mi mahadlok kay unsaon man mi nila? Ningtan-aw ra man mi. Di mi nila mahadlok. (We are just here to support the mayor. We will not be scared because what can they do to us? We are just watching. They cannot scare us),” said Lopez.

Osmeña and his supporters were alarmed when seven masked police with military fatigues and long firearms parked outside the mayor’s house at past 4 p.m. on Saturday, May 11.

“Their faces are completely covered with masks, hats, and sunglasses. They refuse to come down or say anything,” said Osmeña on his Facebook page.

Lopez and the other BO-PK supporters immediately crowded at the chapel across Osmeña’s house to wait for the police to leave.

She said that when members of the broadcast media came to the area and tried to interview the police, the police drove off without saying anything.

Lopez said he was convinced that the police were scared to face the media because they could not explain their real purpose of parking outside the mayor’s house.

“Col. Garma, if your goons were outside my house for a ‘legitimate police operation,’ then why did they cover their faces and leave as soon as media arrived?” said Osmeña in another post on his Facebook page.

Consequently, minutes prior to the presence of the police outside Osmeña’s home, Police Colonel Royina Garma, Cebu City Police Office (CCPO) director, was in the Barangay Guadalupe Elementary School to check the precincts for the upcoming May 13 elections.

The Itug-an ni CD Facebook page of the CCPO conducted a live broadcast on Garma checking the Guadalupe Elementary School for the final preparations of the elections.

Guadalupe has the largest voting population in Cebu City and is considered as the turf of Osmeña.

CDN Digital tried to reach Garma but the colonel did not respond to any of the queries.

As for Lopez, she said that she would watch over the house of Osmeña as long as the police would continue to “scare” the BO-PK leaders and supporters even if it would mean that worse comes to worse, and, perhaps, cost her her life.

“Wa nako mahadlok mamatay, tiguwang nako. Kung mahitabo nga magpinusilay gyod, andam ra ko. (I am not scared to die because I am already old. If it happens that a shooting happens, I am ready),” Lopez told CDN Digital.

In previous statements, Osmeña asked his opponents to spare his supporters, and if they should harm anyone, it should be him instead of them. /dbs