SK calls on police, opponents to spare youth from politics 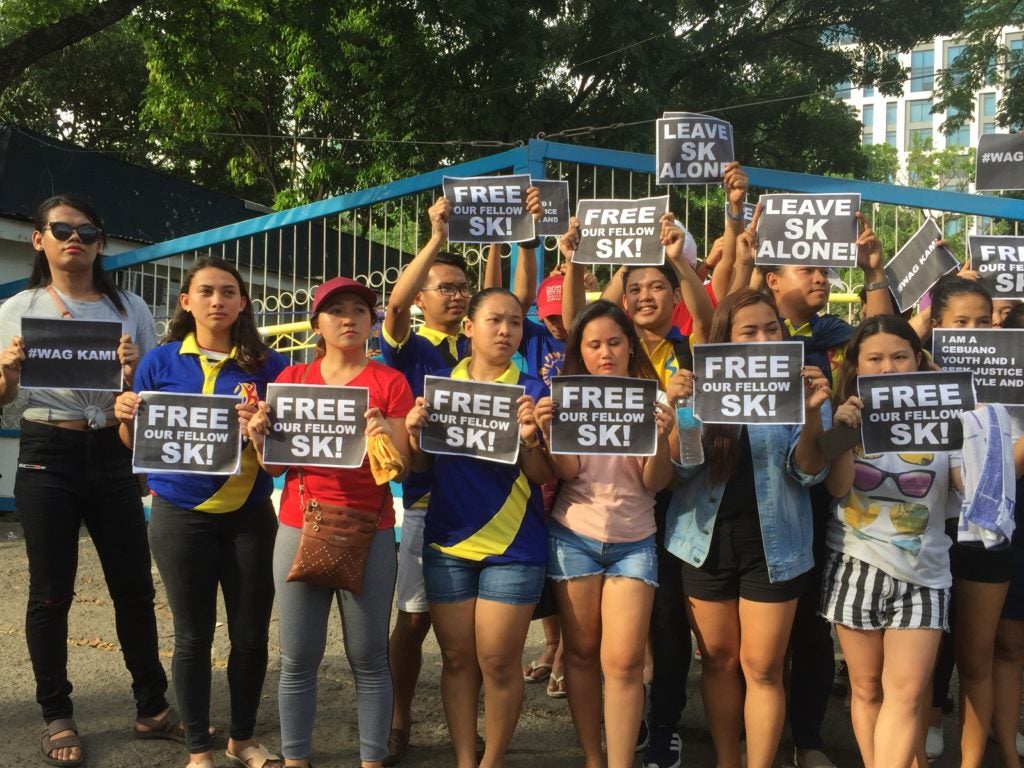 CEBU CITY, Philippines — The Sangguniang Kabataan (SK) Federation in Cebu City called on the police to spare the youth from politically-motivated attacks .

Ex-officio councilor, Jessica Resch, the president of SK Federation in Cebu City, said the arrest of the two SK officials of Barangay Cogon Pardo and two youth volunteers during a sitio-based interleague basktetball tournament seemed like an “attack” to the youth because it was sudden and uncalled for.

Resch said Kyle Baricuatro and John Paul Mahogany, who are SK officials of Barangay Cogon Pardo and are allied with the Bando Osmeña-Pundok Kauswagan (BO-PK) party, were framed because they never gave away fliers of a BO-PK candidate with the prize money they distributed to the winning teams on Saturday night, May 11.

She said that during the tournament, at least 15 masked members of the Special Weapons and Tactics (SWAT) team of the Cebu City Police Office (CCPO) were already waiting outside the gym.

After the event, the SWAT team rushed to the gym, raided the area, and confiscated documents, envelopes containing cash prizes, and the uniform subsidies for the participants.

Resch said there were no fliers of any candidates that were distributed during the event.

But when the SWAT team arrested the SK officials and volunteers for alleged vote buying, the flier of a BO-PK candidate was already among the documents.

Resch is convinced that the “attack” was politically motivated because it was carried out a day before the May 13 elections.

She also said that a witness was “harrased” by the SWAT team when they saw the witness taking a video of the arrest.

The councilor said that at least 10 individuals are willing to stand as witnesses to defend the SK officials and the two volunteers. She said they are not violating any election regulation so the arrest was illegal.

Resch and other SK members stood outside Camp Sotero Cabahug, the CCPO headquarters, since they were refused entry.

At least 30 youths prayed the rosary outside the CCPO headquarters. They prayed that the police will release their colleagues, said Resch.

CCPO Director, Police Colonel Royina Garma, said they have received information of vote buying in several areas, which include the tournament in Barangay Cogon Pardo.

She said her team verified the information and the SK officials were caught in the act of giving envelopes with money and fliers of a certain BO-PK candidate.

“(Inside the envelope,) there was 200 pesos with a name of a candidate. The people, who actually were receiving this envelopes, were signing a document that appears to be a payroll. If you say it’s a payroll then it must be government money,” said Garma.

Garma said that if the suspects want to prove their innocence, they will have to do it on court.

She also denied that the police has political motives stating that they were only responding to an information provided by a concerned citizen.

She urged the SK officials to help the police catch vote-buying activities in their barangays instead of defending allied politicians doing the act.

Garma also urged the public to continue informing the police on vote-buying activities so they can apprehend the violators.

“Just keep on texting us any information and we will act on it,” said Garma in Filipino. / celr

Read Next
Remac: 51% election parapahernalia for Cebu province delivered as of 5 p.m.