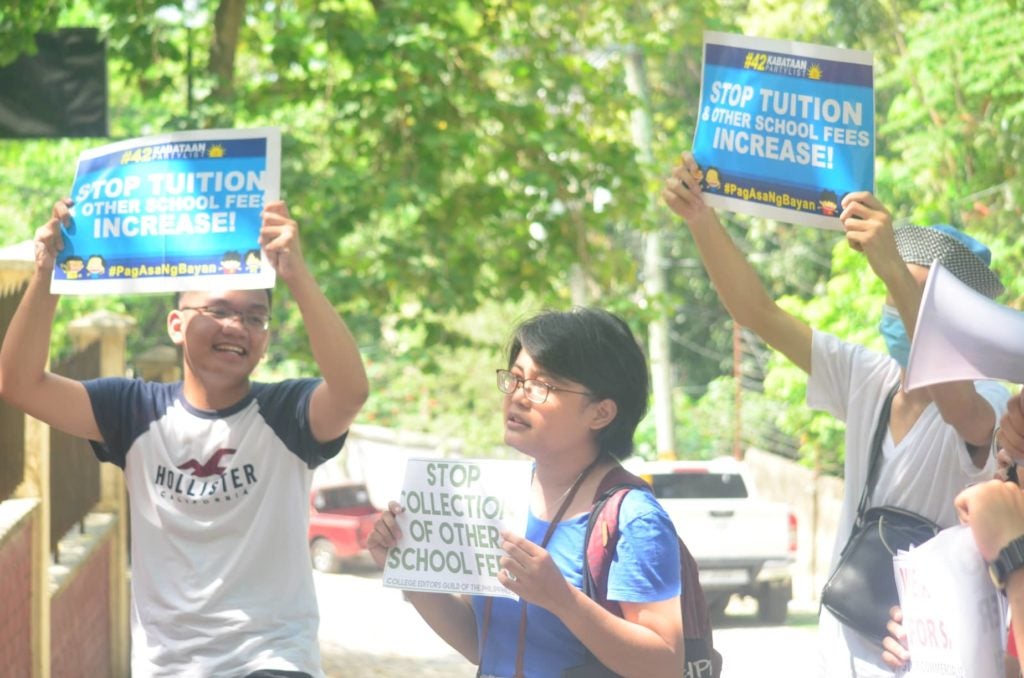 Students protest outside the CHED-7 office to call for the suspension of tuition increases in private colleges and universities and the collection of miscellaneous fees in government schools. /Gerard Vincent Francisco

CEBU CITY, Philippines – Student protesters have asked the Commission on Higher Education in Central Visayas (CHED – 7) to refrain from favoring the interest of private colleges and universities in Cebu and to already cease from granting their requests for tuition increases.

Dyan Cumanao, National Union for Students in the Philippines (NUSP) coordinator, accused CHED of always giving in to the requests of private schools for tuition hikes.

(CHED has become a facilitator for the immediate approval of private schools’ request for tuition hike.)

At least 10 students, who represented different Cebu groups, convened outside the CHED-7 office in Sudlon Lahug, Cebu City this morning, May 27, to protest against any new tuition increases.

CHED-7 officials were hosting a Regional Multi-Sectoral Committee Meeting on Tuition and Other Fees Increase while students protest to air their grievances.

Kabataan Partylist Spokesperson Howell Villacrucis alleged that the CHED – 7 has been very lenient in granting increases in the cost of education in private colleges and universities in Cebu City and in effect hurting students and their families.

(Every year, CHED allows an increase in tuition and/or miscellaneous fees.)

Villacrusis said that while the administration of President Rodrigo Duterte already passed the free college education law, students are still made to pay miscellaneous fees. /dcb