Kevin Durant out for Game 3 of NBA Finals 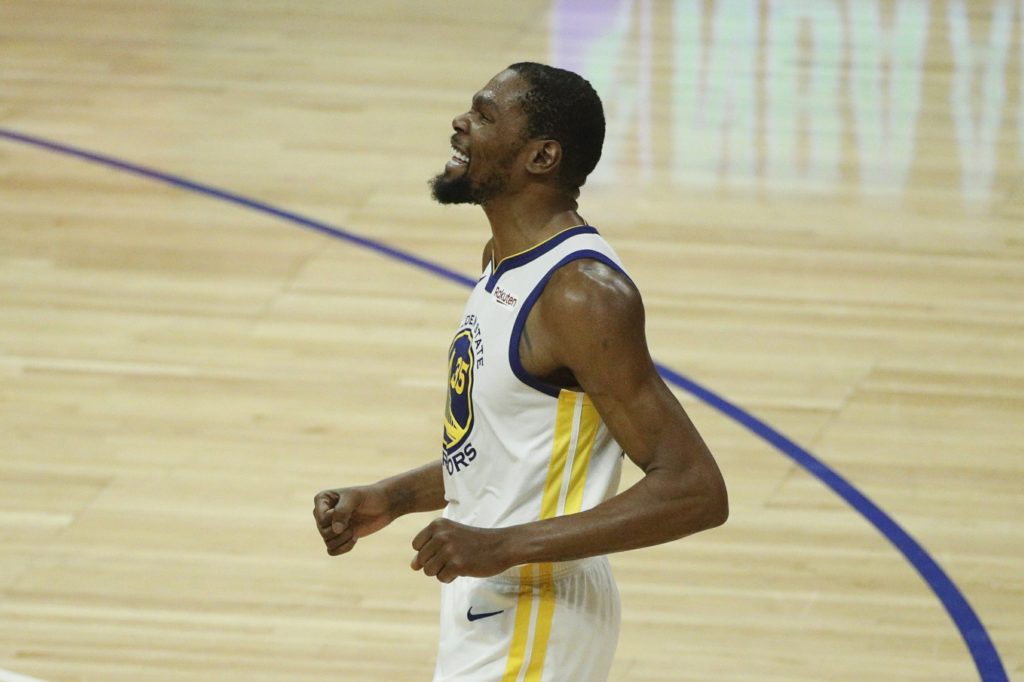 OAKLAND, California — The Golden State Warriors will take the floor once more without two-time reigning NBA Finals MVP Kevin Durant, counting on their depth and home court to carry them as they try to inch closer to a three-peat.

Durant is out for Game 3 of the finals on Wednesday night, still not ready to return for the two-time defending champions as he works back from a strained right calf suffered during the Western Conference semifinals.

Durant didn’t practice with the Warriors on Tuesday, and he has yet to get on the court for a structured session since getting injured May 8 in Game 5 against the Houston Rockets. Durant was set to some work on the court later Tuesday at the practice facility.

Guard Klay Thompson practiced two days after sustaining a mild strain to his left hamstring that forced him out of Game 2. He is listed as questionable for Game 3.

The best-of-seven series with the Toronto Raptors is tied at 1-all.

Thompson said his discomfort Tuesday was bearable — “the pain level wasn’t too crazy at all.”

“It will be a game-time decision. But for me personally, it would be hard to see me not playing. Hopefully, I’ll feel much better tomorrow and be a go for tipoff,” Thompson said.

Along with Durant, Golden State is also down backup big man Kevon Looney. He suffered a non-displaced cartilage fracture on the right side of his collarbone area and will miss the remainder of the finals.

“He’s had such a great season, such a great postseason run,” coach Steve Kerr said. “Fortunately it won’t affect his future, but it’s a big loss for us.”

Here are some things to watch for going into Game 3:

Don’t mind Kawhi Leonard’s limp. Like Thompson, little will keep Toronto’s star guard off the court on the NBA’s biggest stage. Not with no more than five games left.

“A hundred percent,” Leonard said of his health. “I’m on the floor. There are no excuses. Everybody knows everyone’s banged up, bruised up at this moment.”

Leonard is averaging 30.9 points this postseason.

Raptors coach Nick Nurse was still hearing about his move to use an old school box-and-one with Fred VanVleet on Curry.

“In ninth grade a team played one against me,” Kerr joked. “Very proud to announce that. I had a box-and-one, just like Steph.”

“Yeah, I know, everybody’s making fun of me for it, right?” Nurse quipped.

DeMarcus Cousins shined during his first NBA Finals start and just the fourth postseason game of his career.

The big man had 11 points, 10 rebounds, six assists and two blocked shots over 28 minutes while playing in foul trouble in the 109-104 Game 2 win Sunday.

All that after he had been out with a torn left quadriceps muscle sustained in Game 2 of the first round against the Clippers. Cousins didn’t even make his season debut until Jan. 18 at the Clippers following a nearly yearlong absence while recovering from surgery for a torn left Achilles tendon.

Toronto went just 35 for 94 (37.2 in Game 2, compared to 50.6% while winning the series opener, including 11 of 38 from 3-point range. The Raptors’ missed shots and defensive stops are exactly what the Warriors count on to get out into their push-the-pace transition game.

“It’s always a game of rhythm a little bit and you have to watch what’s happening. As you know, we talk a lot about our shot spectrum, the shots we’re trying to get,” Nurse said. “We have to get a certain amount of paint touches. We have to get the ball side to side. Those are things you just have to keep an eye on. I think we just had some lulls in those three areas in Game 2.”

The Raptors were outscored 18-0 to start the third — “the quarter from hell” as Nurse called it — and that all but did them in before a late rally that fell short.

Kerr prepares his role players all season to be ready for moments on the big stage — because Kerr was one of the backups in his day. At home, Quinn Cook, who scored nine points with three 3-pointers in the fourth quarter, regularly resumes his shooting routine moments after the final buzzer sounds.

With all the injuries, all the Warriors must be ready to contribute.

“The way that we play, everybody feels involved on both ends of the floor and has an opportunity to impact the game, not necessarily scoring every possession but just playing within the flow and sharing the ball, moving, playing unselfishly,” Stephen Curry said. “Just a style where everybody is going to get touches and you just have to be confident and aggressive. So again, day to day it’s just whoever is healthy. Be ready to go, compete, have fun doing it. Whoever is out there on the floor, just feel like you can help us win the game.”