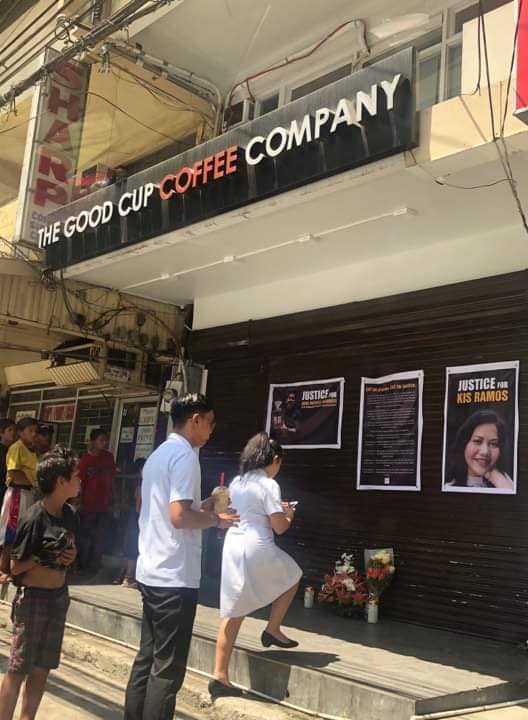 Guests offer their prayers to the victims of the shooting incident inside a coffee shop in F. Ramos Street, Cebu City on April 11. | PHOTO FROM THE OFFICIAL FACEBOOK PAGE OF THE GOOD CUP COFFEE COMPANY

CEBU CITY, Philippines — The police may have found the killer of the Good Cup Coffee employees.

Police Brigadier General Debold Sinas, Police Regional Office in Central Visayas (PRO – 7) director, said they would be filing a murder case against a certain Hans Jurgen Dingcong, whom they suspected to be the killer of John Michael Hermoso and Kis Ramos in the dawn of April 11, 2019.

Sinas said that Dingcong was an acquaintance of Hermoso.

He also said that Dingcong was in a relationship with one of Hermoso’s past lovers.

But Dingcong’s partner allegedly still had feelings for Hermoso, which led to Dingcong to allegedly kill Hermoso out of jealousy.

Dingcong, who is a believed to be a gun enthusiast, is reportedly still in Cebu.

Sinas also said that the family of Ramos had reportedly filed a murder complaint against Dingcong at the Cebu City Prosecutor’s office.

However, the family of Hermoso had not yet filed a case against Dingcong because they believed that there was still another person involved — a mastermind behind the killing.

But Sinas said that police did not have sufficient evidence to arrest the person.

CDN Digital tried to contact the families of both suspects, but neither party replied.

Sinas said he was hoping that Dingcong would surrender to the police, so that they would not have to use force against him.

“We’re telling him that we are filing a case against him. It’s better that he surrenders now, before we issue a manhunt. We will be waiting for the warrant of arrest (against Dingcong),” he said.

Hermoso and Ramos, together with two other employees, were shot as they were closing shop at the Good Cup Coffee in Barangay Cogon Ramos  in Cebu City.

Jerome Amada and Sherwin Rivera, the two employees who were with Hermoso and Ramos when they were attacked, were wounded during the shooting incident on April 11, 2019./dbs

Read Next
UC debuts in Cesafi Partner’s Cup on Tuesday