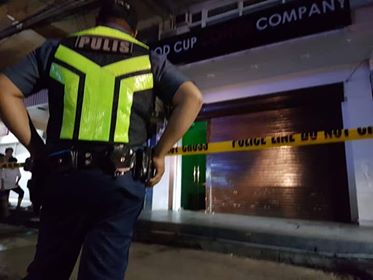 Police cordon the Good Cup Coffee Company on F. Ramos St., Cebu City where 2 persons were killed and 2 others were wounded by a masked gunman past 12 a.m. of April 11, 2019. | CDND Photo/Benjie Talisic

CEBU CITY, Philippines — John Michael Hermoso, Cyril Ramos, Jerome Amada and Sherwin Rivera and another worker were about to close their coffee shop along F. Ramos Street in Barangay Cogon Ramos, Cebu City  at past midnight.

They were ending a long day at work just minutes after 12 a.m. today, April 11, when an armed man who covered his face with a helmet barged into their coffee shop, mowed them down with rapid fire and left without a backward glance on board a motorcycle and fled.

Hermoso, 29, the the owner and head barista of the Good Cup Coffee Company, fell down and was believed to have died right there and then.

Ramos, 21, the coffee shop’s cashier, was rushed to the nearby Velez Hospital but attending doctors said she had died even before reaching the hospital’s emergency room.

Amada, the shop’s waiter, and Rivera, 23, a cashier-cum-barista, are now both fighting for their life at the intensive care unit of the same hospital.

A fifth worker was miraculously unscathed and ran all the way to the Ramos Police Station to report the incident.

Police Lieutenant Elstone Dabon, who led the group that responded to the shooting alarm, told CDN Digital that they rushed to the coffee shop within minutes after they were informed of the mass shooting but the gunman was gone by that time they arrived.

According to the building’s watchman, a person on board a motorcycle stopped at a corner about 15 meters from the coffee shop. He was wearing a jacket and a full-faced helmet that he did not remove as he briskly walked towards the coffee shop.

The witness said the shooter draw out a hand gun, fired repeatedly at the persons inside the coffee shop and walked backed out, boarded his motorcycle and drove towards R. Landon Street.

Police Corporal Eutemio Catalan, the case investigator, said they were still clueless as to the motive of the shooting.

He said they were now looking at the footage of the CCTV camera inside the coffee shop to find out who could be responsible for the crime. /elb