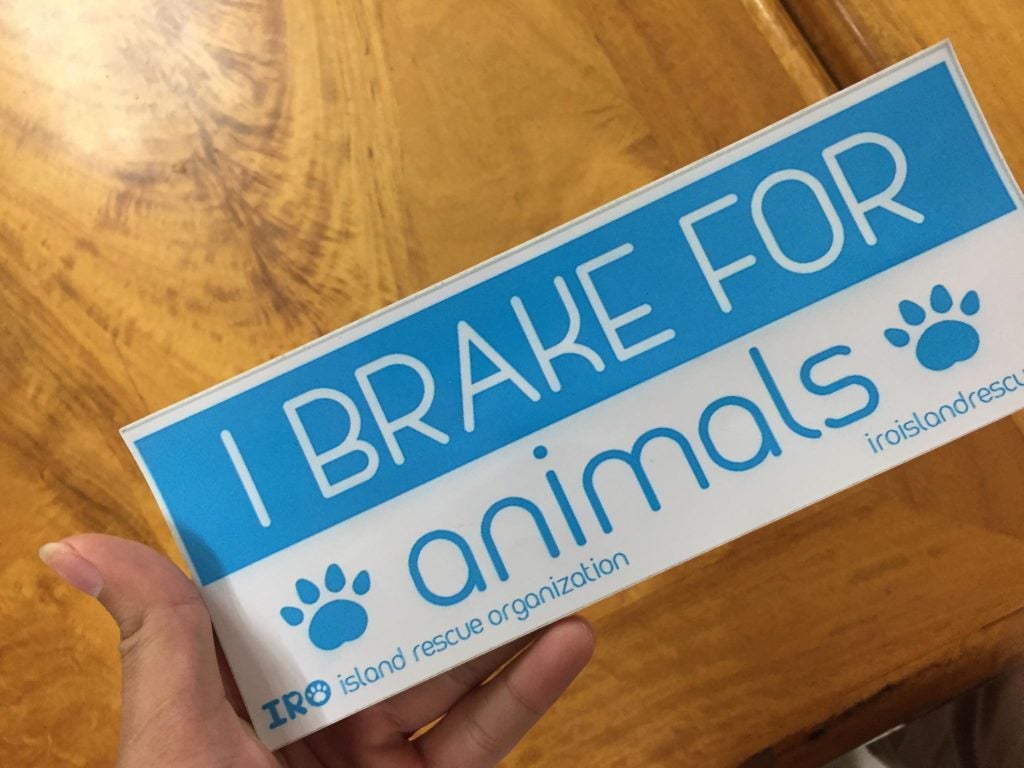 Cebu City, Philippines–The Island Rescue Organization (IRO) is encouraging motorists to drive with extra caution, especially when there are animals on the streets.

Annalyn Aizpuru, president of the Island Rescue Organization (IRO), said that they recorded at least 10 reports of hit-and-run cases in Cebu every day, with “aspins” or “asong Pinoy” usually being the victims.

To prevent roadkills, the organization launched ‘I Brake For Animals’ campaign three months ago.

(We launched ‘I Brake For Animals’ [campaign], for the bumper sticker so that people [motorists] become aware that if there is a dog or cat [on the street] they should drive slowly)

(Usually, we receive at least 10 reports [of hit-and-run] but we can only rescue 1 or two [dogs] because sometimes the dog is already dead [when we arrive].)

Aside from the hit-and-run incident, Aizpuru also said that IRO also rescues dogs who were tortured and abused by their owners.

The stickers can be bought at P150 for the big ones P100 for the small ones.

“The big ones are good for cars while the latter is for motorbikes and helmets,” IRO said through a Facebook messenger chat.

IRO said it has a booth at Parkmall every 2nd and 4th Saturdays of the month.

“You can also buy [the stickers] at Chaka Pet Store in Cabancalan, Mandaue City, Sassy Pets in Parkmall or Shambala clinic along Hernan Cortes Street in Mandaue City.”

According to its website (iroislandrescue.org), IRO is a Cebu-based non-profit organization composed of volunteers dedicated to helping the plight of animals in the region through rescue, education and advocacy.

IRO is affiliated with Friends for the Protection of Animals (USA), a US-501 c (3) non-profit animal rescue organization. It has chapters in Bohol, Cebu, and Bacolod. /bmjo