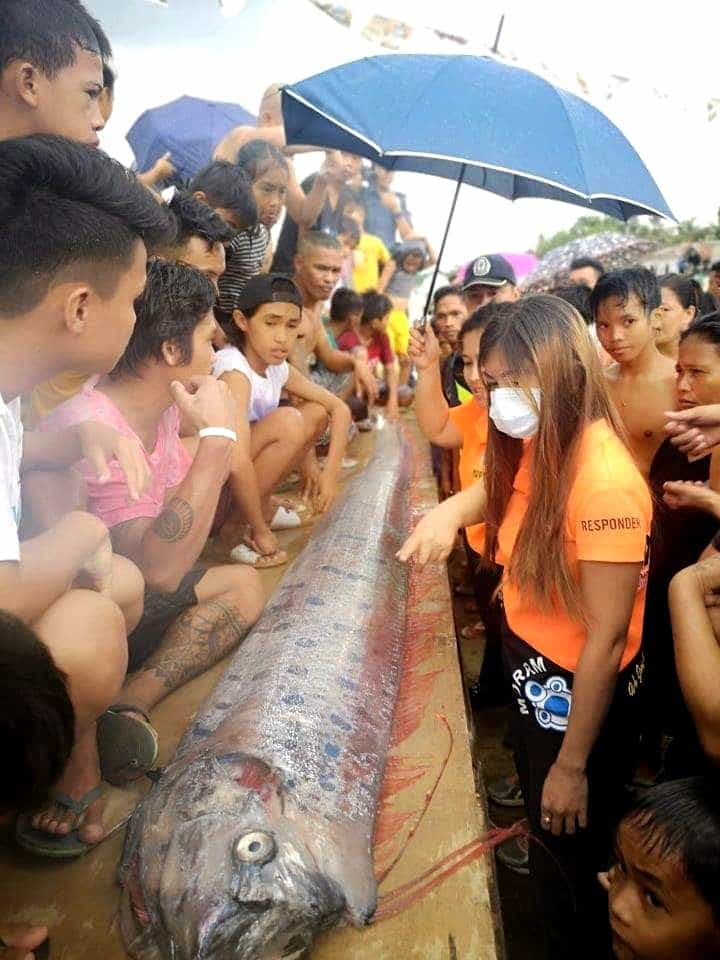 Personnel from Compostela’s Municipal Risk Reduction Management Office check the oarfish that was found on the waters of Barangay Poblacion this afternoon, June 24, 2019. /Photo from the Compostela DRRMO Facebook page

CEBU CITY, Philippines — An oarfish of around 13.9 feet long and 1.6 feet wide was washed ashore in Barangay Poblacion in Compostela town in northern Cebu at around 2 p.m. today, June 24.

But the fish died after some town residents ripped off its head while trying to pull it from the rocks where it was hiding.

(Those who found the fish said it suddenly appeared hiding on the rocks located near the dike. They caught it by the head and started to pull it hard not knowing that it had a soft body, the reason why its head was ripped off.)

Harley Dean Grengia, of the Compostela MDRRMO, said residents buried the fish on the barangay’s shorelines.

Grengia told CDN Digital that it was the first time that an oarfish was washed into their waters.

Some town residents say that the presence of an oarfish, locally known as liwit, is a manifestation of an earthquake that is yet to come.

But Grengia said that this may not be necessarily true. He refused to further comment on the matter saying that he did not have scientific basis for his opinion.

Still, he asked the public to always be vigilant. /dcb

Read Next
LOOK: ‘Heartbroken’ dog waits for master who died of heart attack