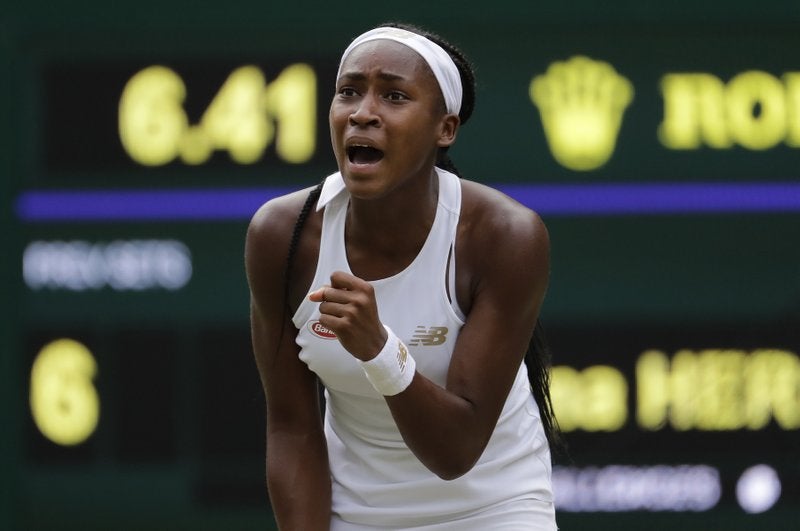 WIMBLEDON, England — Mom and racket-holding Dad joined two coaches and a hitting partner at Coco Gauff’s practice session on a cloudy Sunday afternoon at the All England Club as the 15-year-old American prepared for what could be the toughest test yet of her hard-to-believe Grand Slam debut.

A qualifier who is ranked 313th and the youngest player to make it to Week 2 at Wimbledon since Jennifer Capriati in 1991, Gauff put in extra work on her forehand as she got ready to face former No. 1 Simona Halep in the most-anticipated matchup of the fourth round when the tournament resumes Monday.

For all that she’s already accomplished over the past 1½ weeks — including a victory over seven-time major champion Venus Williams — and all of the attention she’s received — messages via social media from Michelle Obama, Beyonce’s mother and singer Jaden Smith thrilled her the most — what truly stands out about Gauff is her composure, both on and off the tennis court.

“You can kind of fake it ’til you make it,” said Gauff, who lives in Delray Beach, Florida. “But I’m not faking it, at least right now.”

She was never overwhelmed by facing Williams, someone she has grown up admiring. She spoke about resetting her mind after that, and won her next match in straight sets, too, against a past Wimbledon semifinalist. And in the third round, at Centre Court of all places, Gauff was not bothered by twice being a point from losing.

“My parents are just telling me to stay calm, stay focused, because the tournament is not over yet,” Gauff said. “That’s why I’ve been kind of celebrating the night after the matches, then the next day back to practice.”

That’s the sort of levelheadedness that could help her turn what right now is a brief, magical run into a lengthy, successful career.

“This is the easy part,” said Tracy Austin, who watched part of Gauff’s training session. “As she said, before she played Venus, she had one little boy ask her for a picture. And then after she beat Venus, everybody wanted her autograph, which is great, but just shows how well-known she is. And with that, now come all the expectations.”

She turned pro at age 15 in October 1978 and won her first professional singles title that month.

A year later, at 16, she reached the semifinals at Wimbledon, then beat Martina Navratilova and Chris Evert along the way to becoming the youngest U.S. Open champion in history. She won that major championship again two years later.

“I just really hope that she has solid people around her, meaning her parents — they seem amazing — and coaches, agents, that make sure she just goes slow enough. You don’t need to grab everything. Make sure she has time to just be a kid. Carve out enough time for her to be a kid,” said Austin, who at 29 became International Tennis Hall of Fame’s youngest inductee.

“You can’t do all the endorsements. You’ve got to pick certain ones. First and foremost, she’s a tennis player who is coming into her own. And I hope the media, because she’s had great success here, doesn’t push her too fast and expect too much, too soon,” Austin said. “She’s still developing. She’s got 15 years ahead of her, if she wants. Maybe 20 years.”

Austin noted that the WTA now does “a much better job” of guiding younger players than in her day, because, “I was kind of the first one that came along, so it was kind of a surprise. No one was well-equipped with advice.”

Gauff — her given name is Cori but she prefers the nickname Coco — gets plenty of help.

Since she was 10, she has worked with the French tennis academy run by Serena Williams’ coach, Patrick Mouratoglou. Since 2017, the year Gauff was the junior runner-up at the U.S. Open at 13, she has been represented by the management company co-founded by Roger Federer and his longtime agent, Tony Godsick. Before each match, Gauff said, she’s been speaking to Godsick’s wife, Mary Joe Fernandez, who won a U.S. Open match less than two weeks after turning 14 and went on to reach three Grand Slam singles finals and collect two major doubles trophies.

Gauff’s parents were both athletes in college: Her mother, Candi, ran track at Florida State; her father, Corey, played basketball at Georgia State.

“They have the biggest input, especially my mom. She definitely changed my mindset in how I look on things. My dad, he’s the reason why I dream so big,” Gauff said. “I think the kind of ‘believing part’ of my dad and the more ‘stay focused, stay calm’ of my mom is like a good mix.”

Sure is working thus far.

Read Next
Remembering the ‘Mananabang’