A hilarious habal-habal ride experience got the online world laughing 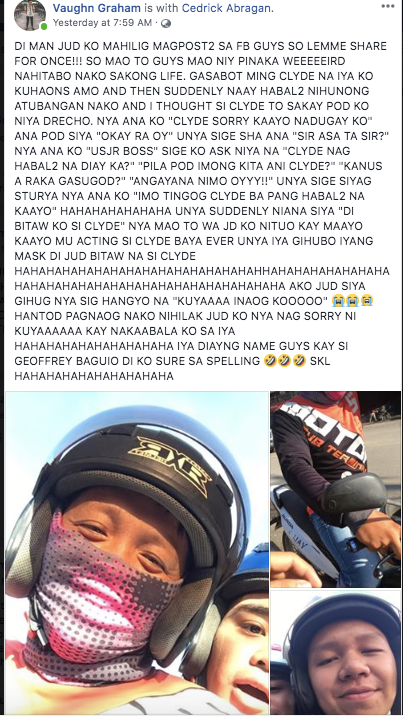 Cebu City, Philippines—Have you ever tried getting into a wrong taxi cab or jeepney?

Well, netizen Vaughn Graham just did and he shared this hilarious experience of boarding the wrong motorcycle for hire on his Facebook account on Monday, July 8, 2019.

In an interview with CDN Digital, Graham said he decided to share the adventure on Facebook because he wanted to remember that experience.

“Nangurog akong tuhod and hands while typing, nya gahilak while gakatawa hahaha!” Graham said of his post that has garnered 2,400 reactions as of 12 noon of Tuesday, July 9. (My knees and hands were shaking while typing for the post and I was crying and laughing at the same time hahaha!)

He explained what actually happened.

(It happened yesterday, at around 7:40 in the morning, my friend Clyde and I agreed to get the stabilizer of the VDR that was left in my house. So I went home and got the stabilizer, when I got out, a motorcycle for hire stopped in front of me whom I thought was Clyde. And I just automatically rode the motorcycle.)

Once he was on board the motorcycle, Graham was asked by the driver where they were heading to. He thought it was just his friend, Clyde, messing around with him. So he just played along and went on with the ride.

In his post, Graham shared the conversation he had with the driver, who was later identified as Geoffrey Baguio.

(I said jokingly ‘Clyde, being a motorcycle-for-hire driver fits you. When did you start and how much do you earn?  I even said ‘Your voice is like of a motorcycle driver already,’  Then all of a sudden the driver admitted and said, ‘I am actually not Clyde sir’).

It was then when Graham felt nervous and embarrassed because of all the questions he asked that might have offended the Baguio.

Luckily, Baguio was kind enough to drop Graham off and was very cool with what happened.

“Ni ana na gyud kog ‘I-naog nalang ko sir, sorry kaayu,’ I was scared and laughing at the same time but sir was kind enough and just laughed it off.” (I just said ‘Sir, just drop me off, I’m so sorry.)

The comments section of the post were full of laugh reactions, with one Dave Gerald saying, “Idola ning bataa!” (This kid is my idol) while CB Helen Grace Poliquit tagged a friend and said “Basaha gud. HAHAHAHAHA” (Read this.) /bmjo

Read Next
Habal-habal driver, two cohorts jailed for possession of shabu worth P1M