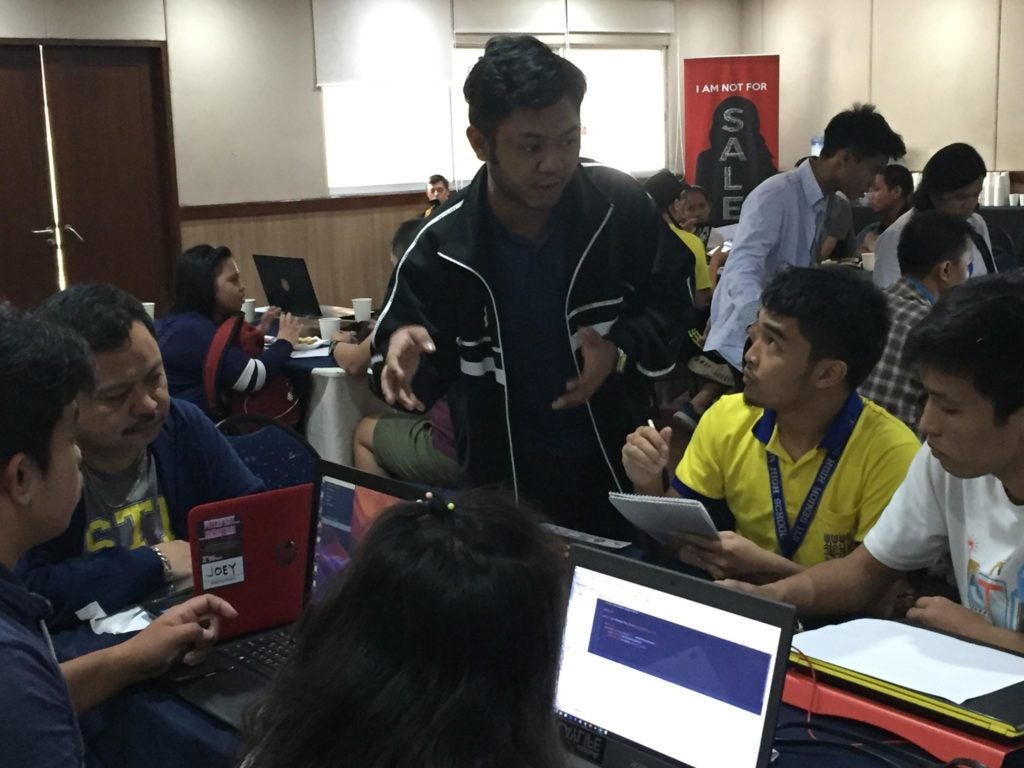 A mentor talks before the participants of the Hackathon on Saturday, July 13 at the Dohera Hotel in Mandaue City

CEBU CITY, Philippines — With her eagerness to learn and to help the community, Khinberly Alburo, 19, decided to show up during the Hackathon proper even she was the only one left in her team.

(Supposedly we are composed with six members [in our team] then two of our members are not sure [to show up], and another member will be having his check-up and will only be able to participate the contest tomorrow [July 14])

(I pursued to attend the Hackathon [because] while I am learning, I am also able to help the community)

Alburo’s team was among the 6 clusters, who have been selected during the Pitchfest, to participate in the 2-day Hackathon contest proper which will be held on July 13 to July 14 at the Dohera Hotel in Mandaue City.

The participants of the Hackathon came from different schools and IT companies in Cebu such as the University of Cebu – Main campus, STI College, and IT company, Appshouse.

The Hackathon, which was organized by the Bidlisiw Foundation Inc., in cooperation with Sympn, CodeChum,  Inter-Agency Council Against Trafficking (IACAT-7) in Central Visayas, Inspire Team, New Logic, and ACX Outsourcing Hub, aims to combat online sexual exploitation of children (OSEC) through innovative IT solutions.

Alburo, an IT student from the University of Cebu – Main Campus (UC-Main), said she was shocked and nervous at the same when her group was chosen by the mentors to proceed to the contest proper.

(I was shocked when our team was selected [proceed to the contest proper] and it was now a challenge for us since we are having our thesis, then the hackathon. We were really not expecting to go this far.)

Aburo said that she was working on a web-based reporting/monitoring tool for parents who want to track their children’s web visit.

She also said that the tool uses a third-party team that would report sexual activities or contents such as photos and videos involving underaged children.

She said that these contents would be stored to a database, and parents who logged in or registered in the website could access these contents to monitor their kids.

Meanwhile, Renee Standforth, one of the mentors from Inspire Team, said the participants of the Hackathon would be housed in the hotel until they would finish their projects on the second day of the event.

“During the hackathon, we should not waste time in creating a software or a program, and a hackathon is like each team will race to complete a certain project within a time. So, magsugod sila mga 10, and mu end sila next day around 3 p.m. Dependi ra na sa mga organizers.”

(During the hackathon, we should not waste time in creating a software or a program and a hackathon is like each team will race to complete a certain project within a time.  So, they will start working on their respective projects from 10 p.m. today until around 3 p.m. tomorrow [July 14])

Standforth said that the participants could not leave the vicinity of the hotel until the end of the Hackathon contest.

She also said that the project of each team should start from scratch to test their programming skills while obtaining their project’s goals.

Basing on the Hackathon’s criteria, Pam Uy, deputy executive director of Bidlisiw Foundation Inc., said that they would pick three winner teams in the contest after the presentation of each team’s prototype on Sunday afternoon, July 14.