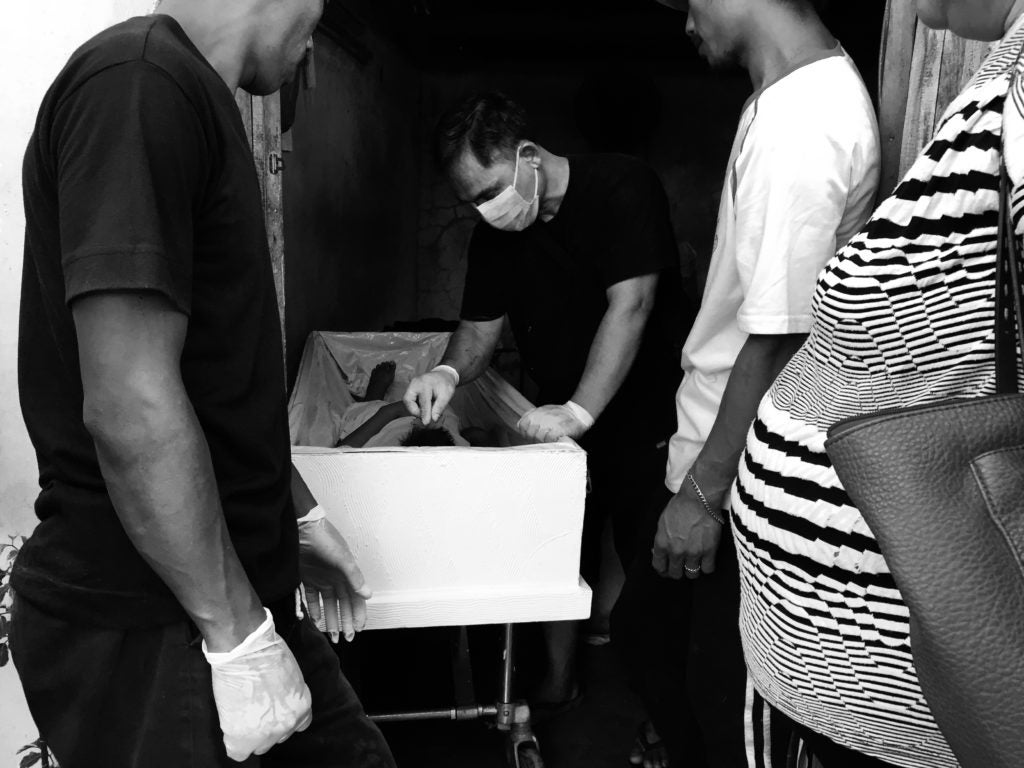 One of the children who died in the Boljoon town truck accident on July 19, 2019. | Delta Dyrecka Letigio

BOLJOON, Cebu, Philippines — Eleven-year-old Jefferson Jorpa wanted to be an electrician when he grows up, yet his family did not have much financially so he sold polvoron in school to help his parents.

He was also a runner, an athlete who liked to chase his dreams, but Jefferson can no longer run following his tragic death along with six other children and two adults in Boljoon town in southern Cebu in the early morning of Friday, July 19, 2019.

Jefferson was with his 10-year-old younger brother and cousin on board the town’s mini dump truck travelling down the mountain road to the town center to play in the Department of Education (DepEd) District meet called the Nutrition Month Cultural and District Meet.

According to Jefferson’s mother, Arlene, the children were excited to join the parade and saved up money by selling food in their school just so they could have pocket money for their trip to town.

The three children were enrolled in the Barangay Nangka Elementary School, all are athletes, and very studious in their classes.

Jefferson’s younger brother survived the accident and was rushed to the Oslob District Hospital for treatment of minor injuries.

The 10-year-old cousin told CDN Digital that he saw Jefferson fall off the mini dump truck when the truck made a tricky turn along the roads of Barangay Upper Becirril.

He jumped off the truck to save himself and found Jefferson’s younger brother with a gash on the forehead along the road.

Both of them heard Jefferson scream for help, but none of them could do anything but watch as the truck crushed the older boy’s body causing him to die soon after.

Arlene said Jefferson was left with broken bones, which most likely caused his death.

The mother sobbed during the interview and said that while she was relieved to find her 10-year-old son alive, her heart was broken by death of her older child.

“Buotan kaayo nang bat-ana. Sakit kaayo akong dughan magtan-aw nga mao ra nay gitangtan sa akong anak. (Jefferson was such a good son. My heart aches to see that this is what happened to my son),” she said.

The last thing Jefferson asked his mother was if she could buy a toy car for him for Christmas, a holiday he will not get to celebrate any more.

Arlene and the families of the other victims who died in truck accident are seeking justice for their loss.

They call for a thorough investigation of the truck driver after the surviving children including Jefferson’s cousin, claimed that the truck was moving too fast before it fell off the cliff.

The families were also asking the mayor of Boljoon to investigate the truck if it was maintained properly and checked before the trip.

Boljoon Mayor Marlou Derama already directed an investigation on the incident, but said he would wait for the results of the test to find out if the driver was really drunk during the incident.

Derama said the town would file charges of reckless imprudence resulting to multiple homicide and physical injuries against the driver if the results would prove that test would show that the driver was positive for alcohol.

He assured the families that the investigations would continue to give justice to the nine individuals whose lives were abruptly stopped by the unforeseen accident.

The municipal government, provincial government, and the Department of Education already pledged to provide for the needs of the victims and to cover the costs of the burial for the deceased.

Yet for the families, the financial help can only ease their burdens, but could not soothe their grieving hearts.

Arlene said that she might never see her boy run again, but she was hoping to see justice run its course over the tragedy that hit their family./dbs