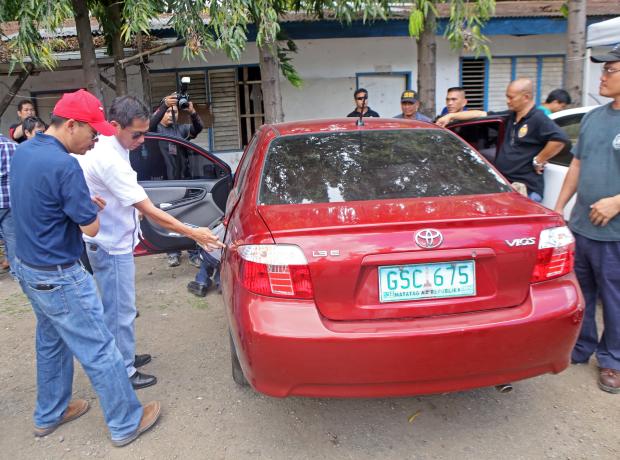 The victim’s brother, Cebu City Councilor Nestor Archival (in white shirt) and Nelson examine the Toyota Vios sedan listed in the search warrant. A second vehicle, a gray Strada pick-up, was no longer in the compound when law enforcers came yesterday to search the place. (CDN PHOTO/ LITO TECSON)

Four policemen, including the regional chief of the PNP Highway Patrol Group, were  tagged as suspects in the Feb. 18 fatal shooting of lawyer Noel Archival and his two companions.

A red Toyota Vios sedan, believed to be one of two cars used in the  ambush, was also recovered yesterday in the compound of the HPG  in Central Visayas in Sudlon, Cebu City.

“We consider these four policemen  the suspects,” said Regional Director Max Salvador of the National Bureau of Investigation (NBI).

Their names appeared in the search warrant as the parties in possession of the vehicles .

NBI sources said  the car was traced from images captured by two closed-circuit television (CCTC) cameras of the Dalaguete Municipal Hall where Archival and his assailants passed moments before the attack.

The names of the policemen were  identified from a security logbook of the HPG as the ones driving the sedan on the day of the murder.

Salvador said the four will be sent subpoenas for them to answer the allegations.

“Each of them will be afforded due process,” he said.

The motive of the murder may be  related to Archival’s  involvement as the lawyer of clients who had been  accused of car theft and tangled with the HPG.

A  document found in the driver’s compartment of the red Vios sedan turned out to be a copy of one such complaint.

The case involved Supt. Iglesia, Insp. Mara and Gulingan, and 10 other  officers from the HPG who were slapped with an an administrative complaint before the Office of the Deputy Ombudsman for the Military and Other Law Enforcement Offices.

The complaint was a counter-suit filed by Archival on behalf of his two clients who were apprehended by the HPG in October last year in barangay Mabolo  Cebu City on suspicion of car theft.

The red car was found parked in front of the HPG office in  Sudlon but it was not among the impounded vehicles in a fenced off area of the compound.The car was clean, its tires inflated indicating that it was well-maintained and was being  used.

Salvador of NBI said charges of multiple murder and violation of the anti-graft law will be eventually filed against the suspects before the prosecutors’ office.

Only SPO4 Galan was present when the NBI team and police showed up  to serve a search warrant issued by Cebu City Regional Trial Court Executive Judge Soliver Peras.

The 55-year-old policeman, who said he was the chief clerk at HPG, is retiring this year.

Galan was trembling as he signed a copy of the warrant to acknowledge its service. He denied any participation in the Archival killing.

“Blind ko ani. Mao na akong pangutana. Nganong naapil ko?” (I’m blind-sided by this. Why was I implicated in this case?)

Archival’s brothers Nestor and  Nelson were present during the search.

“We’re happy. I hope charges will be filed within this case,” he said.

In the Feb. 18 ambush, Archival, along with his aides Candido Miñoza, Alejandro Jaime, and Paolo Cortes were peppered with bullets while traversing the national road in Dalaguete town, south Cebu.

Only Cortes, the vehicle’s driver, survived the attack.

Insp. Saturnino Sedigo represented the HPG during the search yesterday.

Judge Peras, in the warrant, said “there is probable cause and justifiable cause that the violation of article 248 of the Revised Penal Code, as amended (murder) had been committed by the subjects (Iglesia, Mara, Lerion, and Galan).”

The NBI wanted to  search for four vehicles, two of which  had varying plate numbers.

Although they were looking for just two vehicles, the NBI just want to be sure since the plate numbers have been changed from time to time.

The security camera footage which was earlier shown to Cebu Daily News showed a red car blocking the national road fronting the municipal hall to prevent Archival’s Ford Escape SUV from overtaking a yellow Ceres bus which stopped in the middle of the road.

Yesterday, law enforcers had to used a locksmith to  force open the locked Vios sedan.

Inside they found a photocopy of the vehicles’ Certificate of Registration and official receipts under the name of one Ruel Rivera; a notebook, an umbrella, a golf club, a pair of slippers, an extension wire, and a PNP commemorative license plate.

What caught the attention of the NBI was a photocopy of a “Motion For Extension To File Counter-Affidavit” from the Noel D. Archival and Associates law office which was filed before the Cebu City Prosecutors’ Office on Dec. 16, 2013 which was kept inside the driver’s glove compartment.

Senior Insp. Lerion – one of the suspects — was among those furnished a copy of the document.

Lawyer Dexterus John Ypanto, an associate in Archival’s firm who signed the pleading, said the slain lawyer was the counsel of Jane Catherine Go and Chris Reinz who were charged by the HPG for violating the Anti-fencing law, “carnapping”, and illegal transfer of vehicle license plate numbers.

Go was flagged down by HPG operatives while driving a Nissan X-trail SUV in barangay Mabolo, Cebu City last Oct. 10. She was told that her vehicle registration had expired and that its chassis and engine number were purportedly tampered. Reinz, the registered owner of the vehicle, was impleaded in the case.

Go, in turn, accused a certain SPO1 Aldrin Gulingan of the HPG of demanding P200,000 cash from her in exchange for the car’s release.

Go’s lawyer, Archival, made public his plan to file a complaint for extortion, grave coercion, and grave abuse of authority against Gulingan.

Archival also accused 10 HPG policemen for “dishonesty, grave misconduct and falsification of public document” for allegedly trying to mislead a court in Cebu City regarding the license plate of a vehicle owned by his client Maria Paz Yu./  with reports from correspondents Michelle Joy L. Padayhag and Chito O. Aragon