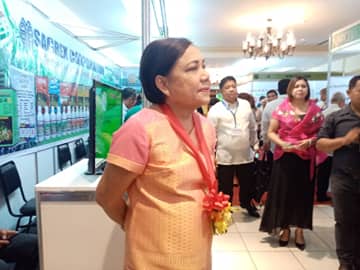 Senator Cynthia Villar recognizes the importance of the sugar industry as a major contributor to the country’s economy. /Irene R. Sino Cruz

CEBU CITY–The Senate Committee on Agriculture and Food will be conducting a hearing on Thursday to look into the alleged failure of the Sugar Regulatory Administration (SRA) to implement the Sugar Industry Development Act (SIDA).

Senator Cynthia Villar said that SIDA of Republic Act 10659, which she sponsored, was passed into law in 2015 yet.

Vilar made the disclosure during an interview at the sidelines of the 62nd Philippine Sugar Technologists (Philsutech) Annual National Convention held on Wednesday, August 14, at the Waterfront Cebu City Hotel.

The lady Senator, who chairs the Senate committee on agriculture and food, spoke during the opening ceremony of the convention.

“I passed the law to boost the sugarcane industry, which contributes P70 billion to the country’s economy annually,” she told the convention delegates.

“The industry really plays a vital role in the country’s economic development. So, we provided the legislative support so the local players can compete head on with foreign players,” Villar said.

The SRA has been tasked to implement programs to improve the sugar industry competitiveness.

According Villar, the budget supposed to be allocated under SIDA has declined considerably since it took effect on April 15, 2015.

“My committee has to step in and exercise our oversight function because based on official reports, since the enactment of SIDA, the SRA failed to implement its programs so much so that from close to P2 billion SIDA budget at its disposal in 2016, it now has only P500 million for 2019,” the Senator pointed out.

The underspending of the budget has resulted in the reduction of the allocated amount, Villar noted.

If there will be no improvement in the program implementation, Villar said, the  SIDA budget in 2020 could go down further to P67 million.

Under the law, the government will allocate P2 billion to the industry.

Villar also said they will hold hearings on the failure of the National Food Authority (NFA) to fulfill their mandate of buying palay from farmers.

She noted that there would be a need to reorganize the NFA./dcb

Read Next
MCIA: Flights to and from Hong Kong Airport now on ‘normal schedule’