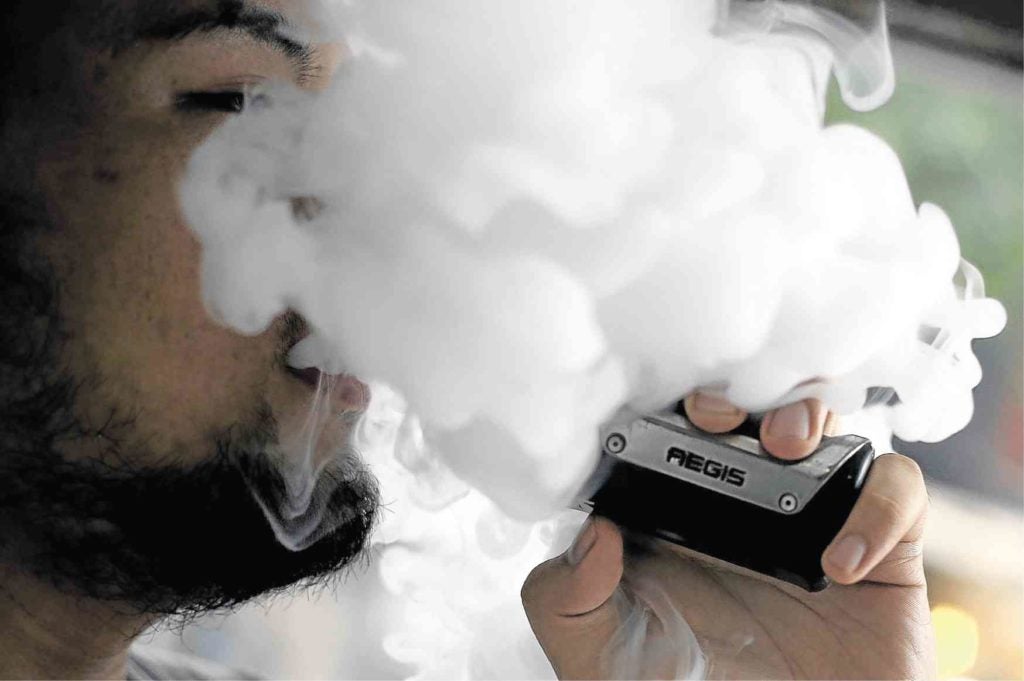 COSTLY VAPOR A bill passed on second reading by the House of Representatives on Wednesday night would make vaping more costly starting Jan. 1, 2020, by imposing a tax of P35 per milliliter of nicotine salt, which would increase by P5 every year until 2023 and by 5 percent every year thereafter. —RICHARD A. REYES

The House of Representatives on Wednesday evening approved on second reading a bill that would raise the excise on alcoholic drinks effective Jan. 1, 2020, as well as on regular and electronic cigarettes.

Without the usual lengthy deliberations, lawmakers approved a substitute bill that amended House Bill No. 1026, the original measure that the House ways and means committee passed the previous day to raise  the “sin tax” on alcoholic products.

They also passed HB 313, formerly known as Trabaho Bill but had been renamed as the Corporate Income Tax and Incentive Rationalization Act (Citira), which would remove tax incentives for large companies while lowering corporate income taxes.

Speaking to reporters on Thursday, Albay Rep. Joey Salceda, chair of the House ways and means committee, expressed hope that the two measures would help promote growth and achieve the economic and social programs of the Duterte administration and beyond.

He said the House skipped deliberations because it adopted the version of the bill that was approved by the chamber in the 17th Congress but was not enacted into law as it did not get past the Senate.

The House adopted the substitute bill, which was formulated after the committee on rules inserted the amendments made by the chamber’s members in the plenary.

“There is wisdom, I guess, in the use of the plenary or what I call the superior powers of the committee on rules to essentially come up with a bill in substitution to the committee report,” Salceda said.

A priority tax measure mentioned by President Duterte in his State of the Nation address to a joint session of Congress in July, the bill would amend portions of the National Internal Revenue Code.

It would impose a P35 tax per liter on distilled spirits and a 22-percent ad valorem tax based on toxicity starting 2020.

The bill would slap on these products an additional 7-percent specific tax per liter yearly in the succeeding years.

It would also impose 15-percent ad valorem tax on sparkling wines or champagne  next year and a specific tax of P696 per liter.

Similarly, this will be increased by 7 percent every year thereafter.

The new tax measure would also impose a tax of P45 for every 20-stick pack or less of cigarettes, which would increase by P5 every year until 2023, and by 5 percent yearly starting 2024.

It would also impose a tax of P35 per milliliter of nicotine salt or a fraction on e-cigarettes, which it classifies as “vapor products.”

The tax will increase by 5 percent every year after 2020.

Conventional “freebase” or “classic nicotine” would be taxed P4.50 per milliliter or a fraction, which would be increased by P0.50 every year until 2023, after which it would be raised by 5 percent every year.

“This will generate around P17 billion for the government,” Salceda said.

“Obviously for [Department of Finance, or DOF, officials], they are not satisfied, but we told them that if they wanted more, they would have to spend more time in the House,” he said.

If the DOF wanted a higher tax rate, Salceda said Congress would have to redo the lawmaking process from square one.

While lawmakers want to impose a higher rate, he said, the House is bound by its rules that it can not significantly deviate from the previous version that it intended to adopt as a refiled measure.

The expected revenue is short by P16 billion, but Salceda said the DOF could push for more in the Senate.

“Our main concern [in proposing the tax measure] is sufficient funding for the Universal Health Care [program], but this is just the beginning, and we can always go back to a higher rate in the Senate,” said Finance Undersecretary Karl Kendrick Chua.

“These bills are the patently prorich sequel to the grossly antipoor and regressive TRAIN 1 (Tax Reform for Acceleration and Inclusion) in line with the International Monetary Fund-World Bank prescription of a broad-based tax reform,” Bayan Muna Rep. Carlos Isagani Zarate said.

Citira, also known as TRAIN 2, cuts the corporate income tax rate from 30 percent to 20 percent over 10 years and rationalizes fiscal incentives for foreign and local businesses.

“Increased revenues from increased indirect taxes under TRAIN 1 are actually meant to ensure funds to offset the losses arising from reduced corporate income taxes under TRAIN 2, estimated at around P52 billion per 2-percentage point cut,” he said.

The Makabayan party list coalition, Zarate said, “strongly opposes” the lowering of corporate income taxes under Citira as it will “disproportionately benefit” foreign and big local corporations, which, according to the deputy minority leader, have managed to “thrive and reap huge profits” under the current 30-percent tax rate.

Zarate denounced how Citira proponents are using the micro, small and medium industries, and even maids, as cover to justify a uniform 20-percent tax rate.