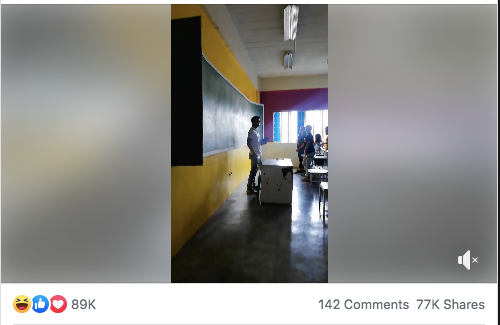 This student acts as if he is the teacher, fooling fellow students in a school in Muntinlupa.

CEBU CITY, Philippines— Students sometimes do mischievous things. Some of it are funny, while some sent us directly to the principal’s office.

This video of a student pretending to be a teacher is an example of how students fool around on campus.

The video was posted by a certain Ellaizon Ebasco, 21, a second-year communications student in a school in Muntinlupa. He recorded a video of his friend, Ephraim Lagura, entering a classroom pretending to be a teacher.

“We noticed that most of the students hang around other rooms because their professors are not around. That time we also didn’t have a professor with us. That’s why we came up with the scenario that one of our eldest friends or fellow classmate pretended to act as a school professor,” Ebasco said.

He did clarify, though, that what they did was just for fun.

“From the bottom of our hearts, we had no intention to do that for a bad reason. Instead, all we want was to have a memorable experience with them,” he added.

The video was taken on August 15, 2019 in their school at the Pamntasan ng Lungsod ng Muntinlupa.

In the video, it is seen that once Lagura went inside the room of the first-year college communication students, those who did not belong to that room immediately left, thinking that the instructor has arrived for his class.

“It was a great experience for us because we didn’t expect anything at all and just wanted to know their reactions. All of us were delighted because of the respect the students showed to their pseudo teacher,” he said.

Some netizens were quick to react to the video. Cruz Cheralyn, “Kaloka”, while Pars Reyes Pajanustan commented, “witty.”