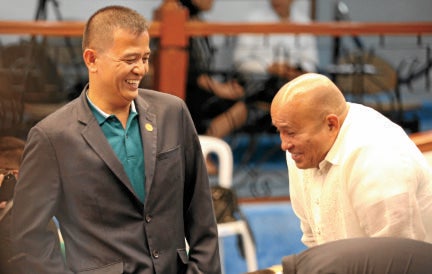 TWO FOR THE PROBE Former Bureau of Corrections (BuCor)
chief Nicanor Faeldon and Sen. Ronald “Bato” dela Rosa share a
laugh during the resumption on Thursday of the Senate inquiry
into the release of heinous crime convicts. Dela Rosa served as
BuCor chief before his election to the Senate in May. —JOANBONDOC

Sen. Ronald “Bato” dela Rosa will also be investigated for the release of heinous crime convicts during his term as chief of the Bureau of Corrections (BuCor), Malacañang said on Thursday.

President Duterte on Wednesday night said he wanted BuCor officials investigated by the Ombudsman amid a public outcry over the release of hundreds of prisoners, including convicted rapists, murderers and drug traffickers, through a law rewarding good behavior in detention.

Mr. Duterte also fired BuCor chief Nicanor Faeldon for disobeying his order to halt the release of convicts through Republic Act No. 10592, especially the discharge of Antonio Sanchez, a former mayor of Calauan, Laguna province, who is serving seven 40-year terms for the killings of two University of the Philippines Los Baños students, including one whom he raped then passed to six of his aides to be gang-raped before being shot.

The President also ordered the more than 1,900 freed convicts to return to jail within 15 days or they would be treated as fugitives from the law and hunted down.

Earlier, the BuCor said 22,049 prisoners were released through the good conduct credit law from 2014 to 2019, including 1,914 heinous crime convicts.

On Wednesday, Senate President Vicente Sotto III said he had received “A-1” information that prisoners could buy their freedom for millions of pesos from an organized group in the BuCor.

The Ombudsman probe of Faeldon and other BuCor officials will center on corruption.

On Thursday, presidential spokesperson Salvador Panelo said Dela Rosa, also a former chief of the Philippine National Police, should also be investigated for the release of prisoners during his term as BuCor chief.

Dela Rosa served as BuCor chief from May to October 2018. He was succeeded by Faeldon, who briefly served in military intelligence after being hounded by scandal out of the Bureau of Customs over drug smuggling through the Port of Manila.

Earlier, Dela Rosa said he signed 120 release orders during his term as BuCor chief. Of those freed for good behavior, he said, only one was a drug convict.

On Thursday, he said he was open to an investigation for those prisoner releases.

“No problem. I’m open to everything,” Dela Rosa said in a text message.

Panelo said it was up to lawmakers to recommend an  inquiry if other former BuCor chiefs who served after the 2013 passage of RA 10592 should be investigated for enforcing the law.

He said it was up to the Department of Justice (DOJ) to work out a process for investigating the former BuCor chiefs.

The Ombudsman can also investigate the former officials on its own, he said.

As for BuCor chiefs who served before 2013 and implemented the good conduct provision of the Revised Penal Code, Panelo said a complaint must be filed before they could be investigated.

Earlier, the Presidential Anti-Corruption Commission said it would investigate prison officials for the release of heinous crime convicts.

On Thursday, however, the Office of the Ombudsman said it had sole jurisdiction over the case.

“Since the Ombudsman has assumed jurisdiction over this case, no other agency is allowed to conduct a parallel investigation unless so authorized by the Ombudsman pursuant to law,” Ombudsman Samuel Martires said in a statement.

There was no immediate comment from the anticorruption commission.

In the Palace, Panelo said a court order was not necessary to nullify the release of the convicts.

“From my point of view, since you have been released erroneously without legal basis, then the logical conclusion is you’re out and you have not served fully your sentence, so you have to go back,” he said.

Panelo said the government might seek the extradition of foreign convicts who had been released through the good conduct law.

PNP chief Oscar Albayalde said on Thursday that although a good conduct grant was irrevocable under the law, unlawful grants were “void from the start.”

Albayalde advised the freed convicts to surrender first before challenging the legality of their rearrest.

During the continuation of the Senate inquiry into the application of RA 10592 on Thursday, Justice Secretary Menardo Guevarra said the DOJ would issue immigration lookout bulletin orders to prevent freed convicts from leaving the country.

Guevarra told the Senate committee on justice and human rights that “not more than 10” convicts had surrendered as of Thursday morning.

He said he had received information that several freed convicts had sent feelers for voluntary recommitment to prison.

“We hope that many more will follow within the next 15 days so that we won’t have to do some coercive measure,” Guevarra said.

The freed convicts could report to any police or military detachment, and the stations or military units would have to coordinate directly with the BuCor, he said.

After the hearing at the Senate, Guevarra went to the House of Representatives to brief the congressmen on the DOJ’s proposed budget for next year.

During the hearing, Guevarra urged the lawmakers to amend RA 10592 to specify the crimes that should be excluded from good conduct consideration.

Among the convicts released for good behavior were Josman Aznar, Ariel Balansag and Alberto Caño, who had been sentenced to 40 years in prison for the rape and killing of sisters Marijoy and Jacqueline Chiong of Cebu City in 1997.

Mr. Duterte fired Faeldon on Wednesday amid the public uproar over their release and the plan to free Sanchez.

The President’s decision drew support and praise from senators on Thursday.

Senate Minority Leader Franklin Drilon said Faeldon should face charges for incompetence and for lying about his actions in connection with the plan to free Sanchez.

“Faeldon was caught lying through his teeth. He tried to deceive the Senate and the public. He lied over and over again to evade accountability,” Drilon said.

Faeldon appeared at the Senate hearing on Thursday  looking in high spirits.

“I’ve never been happier than now,” Faeldon told reporters. “When a yoke has been removed from your shoulders, you can soundly sleep.” —WITH REPORTS FROM JEANNETTE I. ANDRADE, PATRICIA DENISE M. CHIU, MELVIN GASCON AND AP