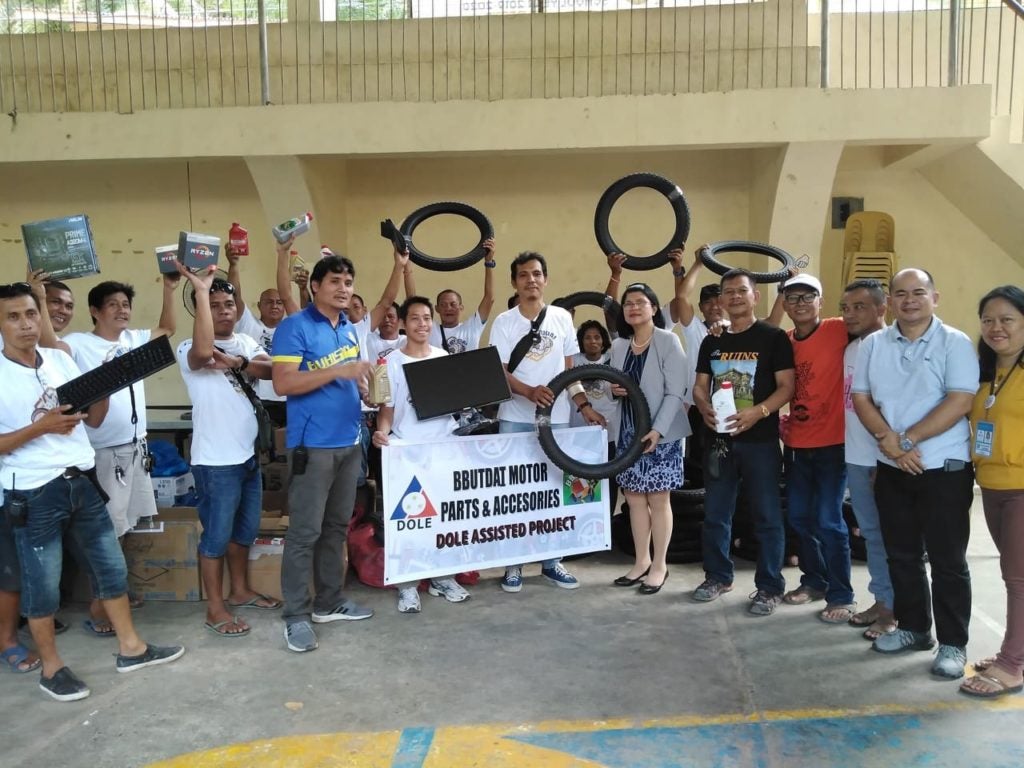 Salome Siaton, regional director of the Department of Labor and Employment in Central Visayas, turns over tools and equipment to the Barangay Buhisan United Tricycle Drivers Association Inc. under the department’s assistance program. | DOLE-7 photo

CEBU CITY—Providing transport to commuters may have been the sole source of livelihood for a group of tricycle drivers in Buhisan in the past.

But they now have put up their own business.

The Barangay Buhisan United Tricycle Drivers Association Inc. is going into the pisonet and motorcycle parts business, with the help of the  Department of Labor and Employment in Central Visayas (DOLE-7).

Abraham Encio, president of the association, said the business was made possible through the livelihood assistance of DOLE-7.

“The other groups can see that the government is doing something to help poor people like us,” Encio said in Cebuano.

“We would like to thank the government, especially the Department of Labor and Employment for trusting us and our ability to run a business,” he added.

These will be used for their pisonet, and motorcycle parts and lubricants business.

Siaton explained that the assistance the group had received was in the form of Kabuhayan Enhancement since they already got livelihood assistance from the DOLE three years ago.

“This project is an enhancement of the existing livelihood undertaking of the tricycle drivers which will enable their livelihood to grow into a viable and sustainable business,” Siaton added.

The enhancement would help provide beneficiaries with income at least at par with those earning the minimum wage, she said.

The Kabuhayan enhancement project could only be granted tovthe beneficiaries who have shown they could sustain their livelihood projects, Siaton said.

To recall, the Barangay Buhisan United Tricycle Drivers Association, Inc. managed to expand their business after receiving livelihood assistance from the DOLE for the first time in 2016.

The group had bought three new tricycle units. Also, all the driver-members get a share of the profits every December.

Barangay Captain Greman Barete of Buhisan acknowledged and expressed thanks for the help that the DOLE had extended to the constituents in their barangay.

“In addition to the livelihood assistance for the motorcycle drivers’ group, Barangay Buhisan is also a recipient of TUPAD. Thank you very much,” Barete said.

Tulong Panghanapbuhay sa ating Disadvantaged/Displaced Workers (TUPAD) is one of the major components of DILEEP, which is a community-based package of assistance that provides emergency employment for displaced workers, underemployed and seasonal workers for a minimum period of 10 days and a maximum of 30 days, depending on the nature of work to be performed. /bmjo

Read Next
Duterte wants to get rid of Customs brokers, examiners