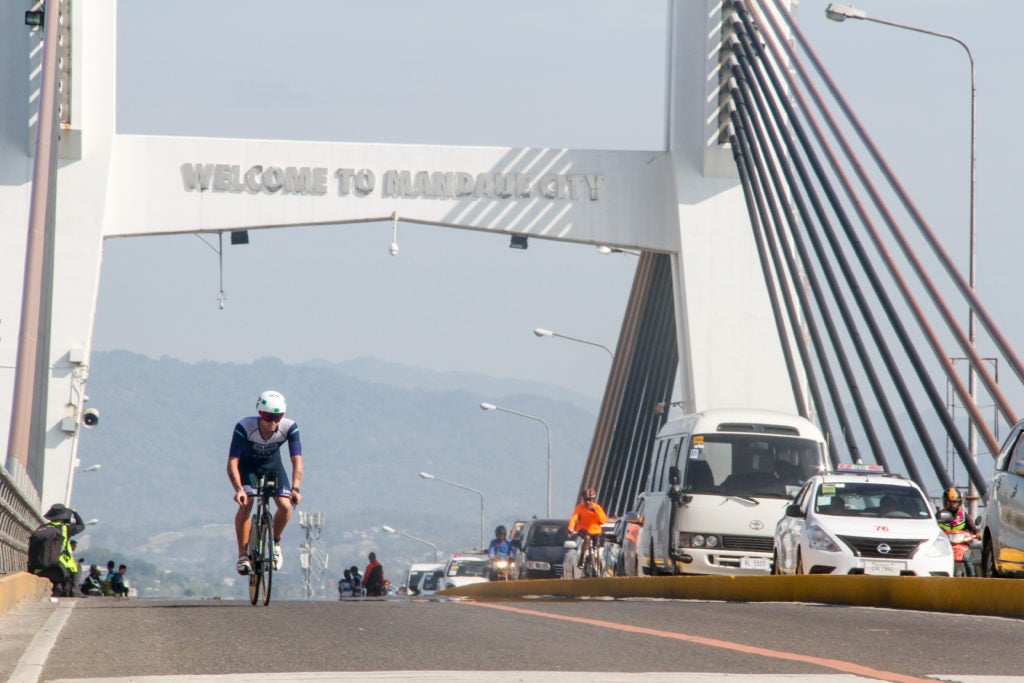 A biker participating in the IronMan race passes through the Marcelo Fernan Bridge. | CDN file

CEBU CITY, Philippines—Some members of the biking/cycling community in Cebu are dismayed with the plan of the Mactan-Cebu Bridge Management Board (MCBMB) to ban bicycles from crossing the two bridges connecting Mactan island to Mandaue City.

Banning bicycles on the bridge was one of the topics discussed by the MCBMB in a meeting on Tuesday, September 10, 2019.  The Board also discussed measures to prevent suicide attempts in the two Mactan-Cebu bridges.

Noted bike enthusiasts had something to say about the plan.

(I am not in favor of that. Bikers are responsible people and they know the proper guidelines in using the road.)

Instead of banning bikes, Remolino suggested other ways to help improve safety on the bridges.

One advice was to put village watchmen on the bridges.

(They should station village watchmen there who will check on people whose actions are suspicious. You can see if a person has a problem or not. And, they should immediately talk to these persons because in that kind of situation, anything can happen in split seconds because they’re no longer in their right minds.)

Multi-titled cyclists Niño Surban was also disappointed with the decision. He questioned why bikers are the ones who will have to suffer when most of those who attempt to commit suicide by jumping off the bridge are not bikers.

(What I can say about that is to not ban the bikes because they have nothing to do with those who jumped from there. It’s understandable to put a ban if there are a lot of incidents wherein people on bikes fall off the bridge. But that hasn’t happened.)

For Surban, it is unfair to those who go to work riding bikes if they aren’t allowed to cross the bridge anymore. Putting up higher railings, he said, may help. But not banning bikes.

As for Maxi Maximo, whose children are also award winning cyclists, he said he believes that the ban is more for the safety consideration of the cyclists than that of the suicide issue.

Land Transportation Office Central Visayas (LTO-7) Director Victor Caindec did say it is dangerous for bicycles to cross the bridge, considering the volume of traffic on the bridge.

Caindec said during the meeting that under Republic Act 4136 or the Land Transportation and Traffic Code, non-motorized transport, including bicycles, and walking, are actually prohibited on bridges.

However, Maximo still does not agree to permanently ban bicycles from plying the two bridges.

“I do not agree to the ban. A lot of Cebuanos are using bicycles as a means of transportation. Can you imagine a person who bikes to work from Mandaue to Mactan cannot cross the bridge anymore? Where will he pass then?,” said Maximo.

He suggests to “allow the cyclists to cross the bridge provided he walks his bike and not ride on it, just like pedestrians crossing the bridge. They can do this in the [Marcelo] Fernan Bridge since a pathway has been provided for this.”

According to Maximo, the bicycle ban is “jurassic thinking.”

“Instead of encouraging Cebu to use bicycles as an alternative mode of transpo, the proposed bridge bike ban is jurassic thinking actually,” quipped Maximo.

Triathlete Rico Valentin believes the measure was not well thought of.

(I don’t think the bikers who crossed the bridge have anything to do with those attempting to commit suicide by jumping off the bridge. So why would they ban bicycles. There’s more accidents there involving motorcycles than bikes.)

(Perhaps it is better that they tighten the security on the bridge. They should add personnel to keep watch. The CCTV cannot help because it cannot stop or prevent a person from jumping off the bridge.)

Ralph Arce, also a triathlete, said: “Cebu is home to the crown jewel of Philippine triathlon which is hosted by Lapu-Lapu annually and I find it very ironic that our own LGU hatches the idea of banning bicycles on both Mactan-Mandaue bridges. I know their reason behind trying to implement it is noble but there must be another way. A lot of people who bike their way to work will be affected. It will also discourage residents in Mactan/Mandaue to exercise and engage in a healthy lifestyle.”

“Did the lawmakers think this through? Backwards kaayo ni nga solution. How about cutting the number of cars, better public transport, or putting more security to prevent people from jumping if that’s the reason why they are banning bikes,” she said.

Another enthusiast who shared her thoughts is Scarlet Su-Villamor, who is part of the Lear PETC Bike to Work campaign.

“This new progress on the province’s counter-suicide measure is a sad news for us because we have employees who ride their bikes to and from work on a daily basis, crossing the Mactan-Mandaue bridges,” she said.