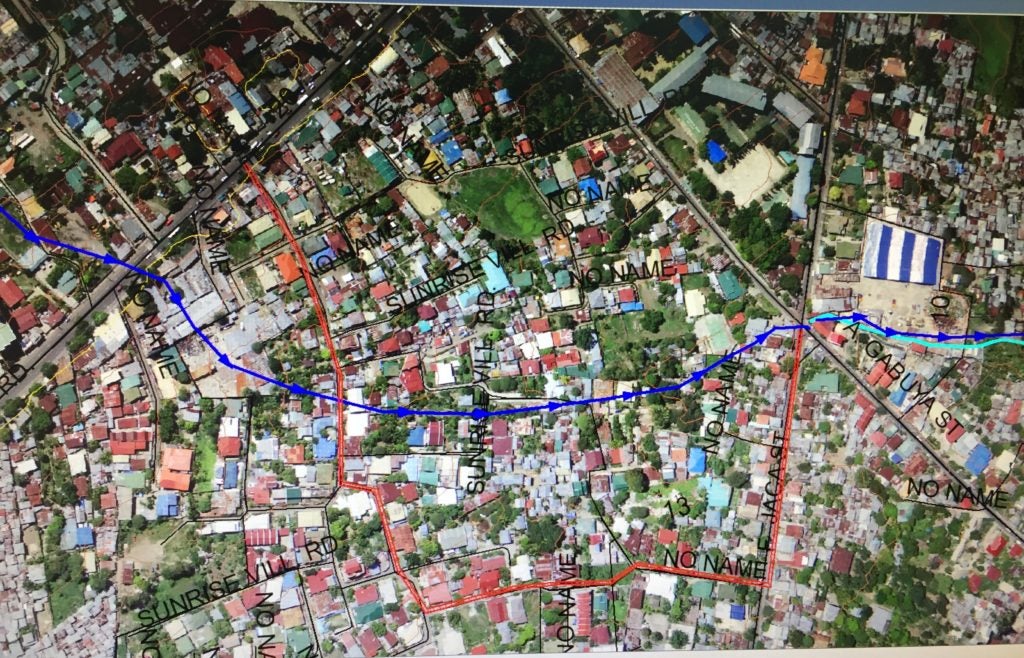 The natural creek (blue arrows) that flows through Barangay Poblacion Pardo in Cebu City. The blockage of some parts caused the long term flooding of a subdivision in the area. | Delta Dyrecka Letigio

CEBU CITY, Philippines — The Cebu City Department of Engineering and Public Works (DEPW) said that the flooding problems in Barangay Poblacion Pardo, that has not subsided for months, cannot be solved without the cooperation of residents whose homes stand on top of the creek where the water used to flow freely.

The 2nd Street of a subdivision in Pardo have been submerged in knee-length water for the last three months since the beginning of the rainy season, without subsiding due to the blockage of the natural creek or canal that passes through the area, said Engineer Kenneth Carmelita Enriquez, the head of DEPW.

Enriquez said that this problem has been recurring for years and in April 2019, the DEPW under the previous administration, managed to suck out the stagnant water flooding the area.

However,  after the rainy season began last, the water has once again risen on 2nd Street, which turned murky over time, and becoming a breeding spot for mosquitoes and other pests.

The culprit, according to Enriquez, is the refusal of the residents on 3rd Street to open up the road and the drainage system in the area to let the water flow.

“Dili sila mosugot kay once ablihan to nila ang dalan, moagi ang tubig, sila na sad sa 3rd Street ang bahaon. Apan mohubas raman unta. (The residents of 3rd Street will not agree to open up the road because once the water flows, they will be flooded. However, the water would have eventually subside),” said Enriquez. 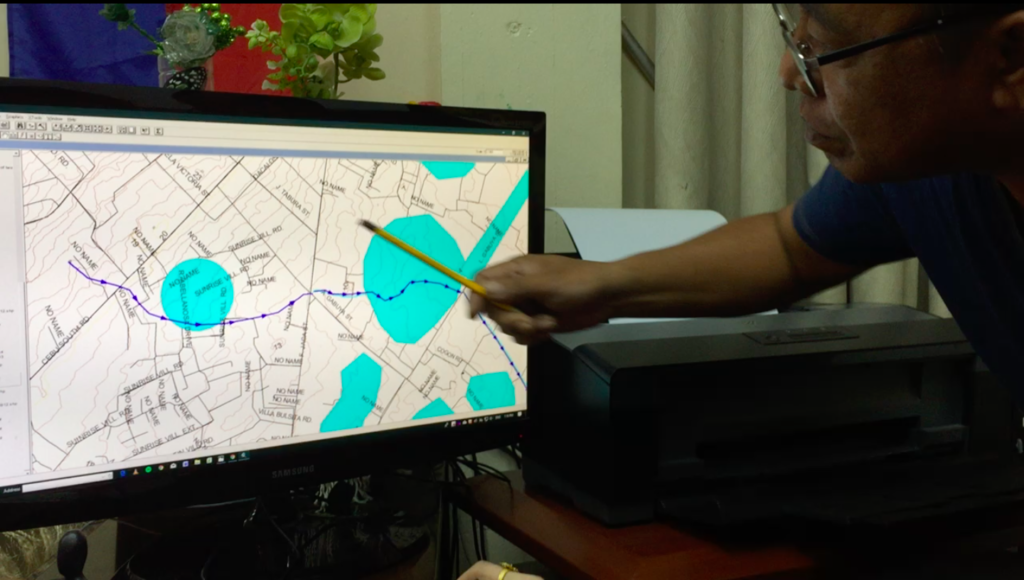 Engineer Guillermo Viola of the Department of Engineering and Public Works in Cebu City will shows that the flooded area in Barangay Poblacion Pardo is actually a water basin where water is expected to flow into before being released through a nearby further unto the creek. | Delta Dyrecka Letigio

Engineer Guillermo Viola, the head of the drainage planning division of the DEPW, said the area is part of a water basin where water can potentially accumulate overtime.

A creek used to freely flow in the area, bringing the water downwards eventually meeting the Bulacao River and opening to the sea. But with subdivisions rising in these areas, the water has been diverted into different paths, eventually settling on 2nd Street.

Last year, the DEPW began meeting the residents to solve the problem, but the residents of 3rd Street allegedly turned hostile over the possibility of allowing the flood to flow into their area, even if it would eventually subside.

This year, the Department of Public Works and Highways (DPWH) will be conducting massive expansions of the drainages in main thoroughfares especially at the Natalio Bacalso Highway, that will expectedly lessen the amount of water coursing to 2nd Street, lessening the flood.

However, even with these solutions, Viola said the residents will need to cooperate to open up some passageway for the water because the water will continue to flow in the area.

Enriquez said they will bring the matter to the City Legal Office because they cannot force the private residents to give up their space for the creek without some legal basis.

She said that water bodies are protected by the Water Code of the Philippines, but they may have to go to court to get a ruling to protect the Pardo waterways.

“It will be a long process,” she added.

She said that no matter what the residents do, water cannot be stopped from flowing, and if they attempt to, they will face the “ugly” repercussions./elb

Read Next
Bike ban on Mactan-Mandaue bridges starts; Gwen says bridges are not built for the bikes