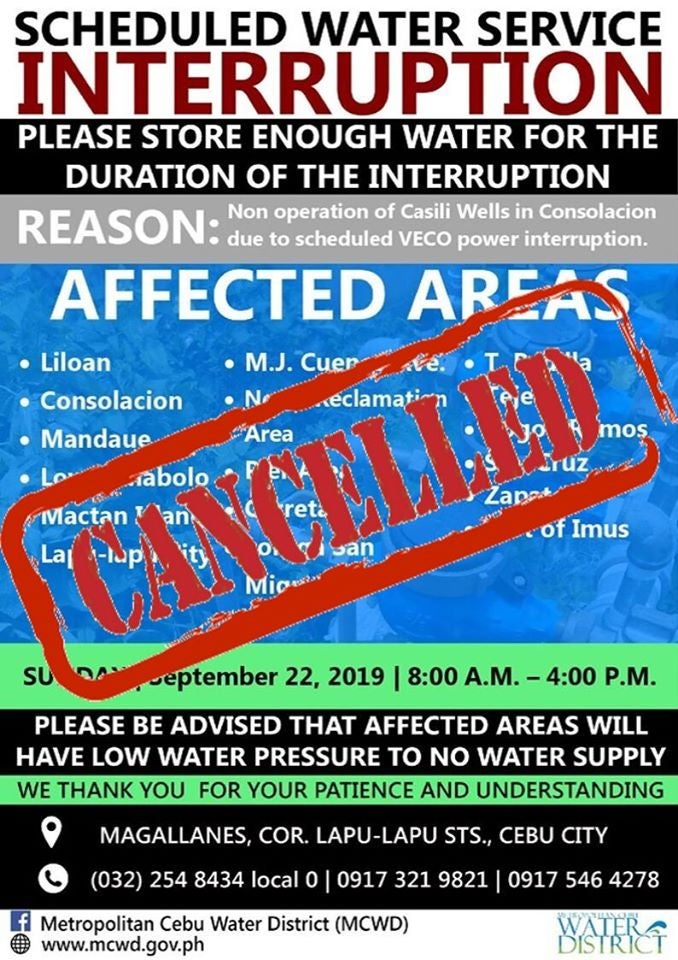 CEBU CITY, Philippines – The Metropolitan Cebu Water District (MCWD) announced this afternoon, September 21, that they will no longer push through with the eight-hour water service interruption scheduled on Sunday, September 22.

But Charmaine Kara, MCWD’s community relations and external affairs department manager, begged off from going into the details of the water district’s decision.

MCWD announced earlier that they will be implementing an eight-hour water service interruption from 8 a.m. to 4 p.m. on Sunday, September 22, that will result from the non-operation of their water wells located in Barangay Casili in Consolacion town as a result of a scheduled power interruption to be implemented by Visayan Electric, formerly known as Veco (Visayan Electric Company).

The interruption was supposed to affect their service areas located in the towns of Liloan and Consolacion and the cities of Mandaue, Lapu-Lapu and Cebu.

In an interview this afternoon, Kara said they are scheduled to meet with Visayan Electric officials next week to discuss means on how to minimize power outages that may also affect MCWD’s services.

“Tomorrow’s 8-hour water service interruption due to a Visayan Electric power outage affecting MCWD’s wells in Consolacion has been CANCELLED so as not to add to the water supply shortage in the affected areas. MCWD’s Casili wells will be operating. We apologize for the inconvenience,” MCWD posted on its official Facebook page past 5 p.m. today. | dcb