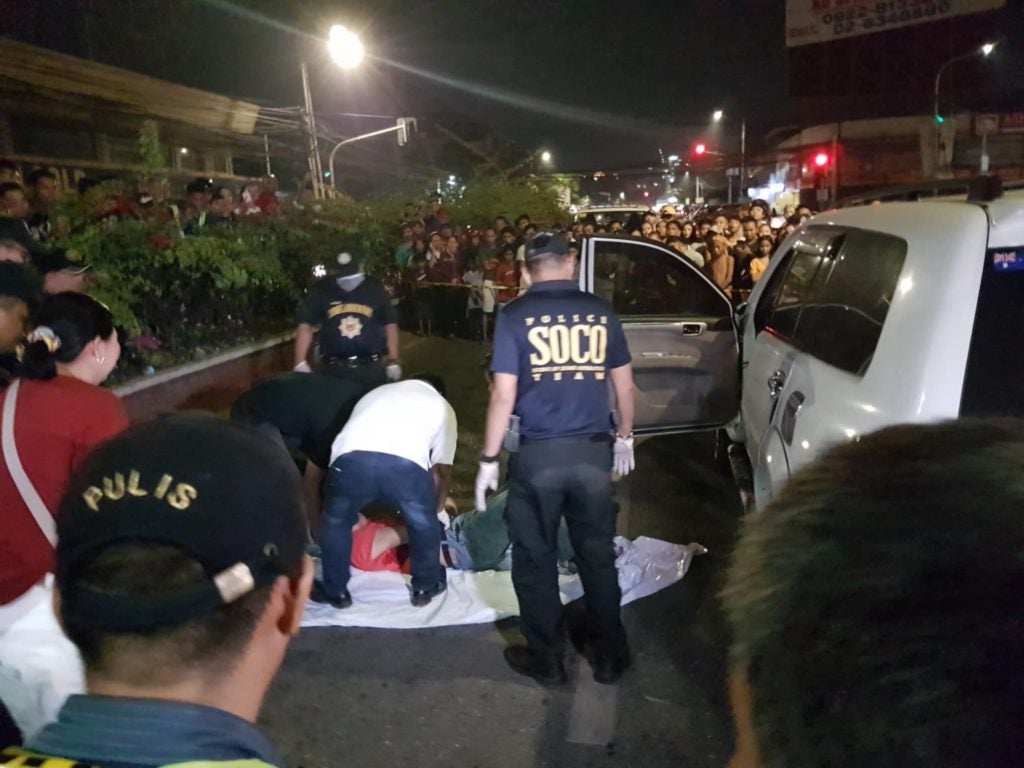 Personnel from the Scene of the Crime Operatives (SOCO) examine the crime scene where a man was shot dead inside his SUV along Juan Luna Avenue Extension on Sunday night, September 22, 2019. CDN Digital photo | Alven Marie A. Timtim

Police Staff Sergeant Ador Bacalso, day desk officer of the nearby Mabolo Police Station, said the incident was reported at around 9 p.m.

Watch the live report by CDN Digital here just moments after the crime was reported.

LIVE: A man on board a white Mitsubishi Montero Sport SUV was shot dead by still unidentified motorcycle-riding men at around 9 p.m. on Sunday, September 22, 2019, along Juan Luna Avenue Extension in Cebu City. The incident happened just meters away from the Mabolo Police station. | Alven Marie A. Timtim #CDNDigital

Based on the testimonies of witnesses in the area, the victim was shot by men who wore masks and black jacket riding a motorcycle.

The ambush happened just meters away from the Mabolo Police Station, and near the area where a policeman, later identified as Police Captain Delfin Bontuyan, was shot dead by unidentified gunmen last May 21, 2019.

Police Lieutenant Pablito Saldo, deputy station commander of the Mabolo Police Station, said  initial investigation showed that the victim was hit on the left side of his head and the right side of his lower chest.

JUST IN: Interview with Police Lieutenant Pablito Saldo, deputy station commander of Mabolo Police, regarding the shooting incident along Juan Luna Avenue Extension in Cebu City on Sunday night, September 22, 2019. Saldo said the initial investigation shows the victim was hit on the left side of his head and the right side of his lower chest. | Alven Marie A. Timtim #CDNDigital

The victim was reportedly waiting for the traffic light in an intersection ahead of the crime scene to turn green when motorcycle-riding men stopped beside the driver’s side of the SUV. It was then that the back rider allegedly pulled out a gun and shot the victim.

There were three bullet holes found on the driver’s side window of the vehicle.

Members of the victim’s family arrived at the crime scene at around 10:50 p.m. /bmjo