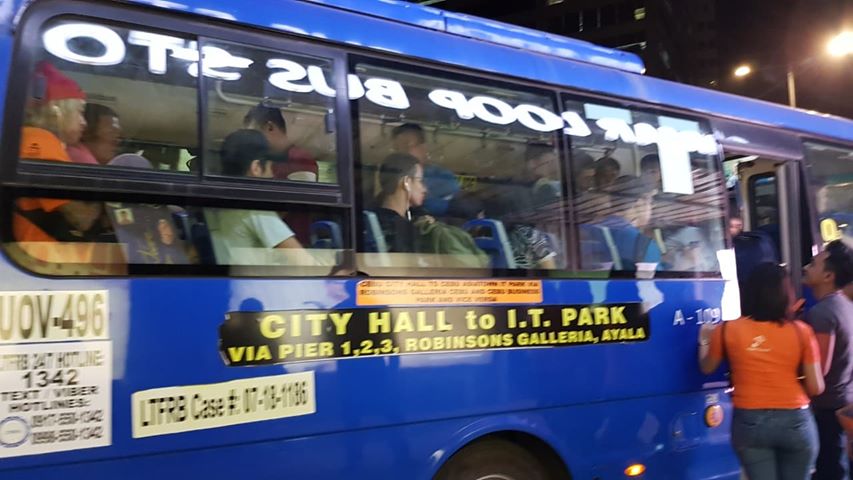 A netizen has raised a concern on the alleged abuses by Beep drivers especially during the rush hours. | Contributed photo

Mayor Edgardo Labella issued the clarification following complaints of overloading and the failure of beep drivers to follow their designated loading and unloading areas especially during the rush hours.

“We will call their (Beep’s) attention because they are not supposed to violate traffic rules,” Labella said.

Victor Caindec, director of the Land Transportation Office in Central Visayas (LTO-7), told CDN Digital in a text message that they will not hesitate to apprehend beep drivers caught violating traffic rules.

But he said that the revocation of their franchise will be left for the Central Visayas office of the Land Transportation and Franchising Regulatory Board (LTFRB-7) to do.

“They can be penalized. Please ask those (complainants) to file their formal complaints with our office,” said LFRB-7 director Eduardo Montealto Jr.

CDN Digital tried but failed to reach the Beep management for their comment. Calls made to their Cebu City office were unanswered.

“Beeps are overloaded, not following the schedule, stops. They are getting worst than Jeepneys. LTO, Mayor, Citom should do something about it. Designated stops, schedule written and posted everywhere. Not waiting till one beep is overloaded and leave from the end station. Get things right please. The people deserve things better,” Banderas said.

Montealto said that Beep which started operation on December 22, 2018 only has a capacity of 26 sitting and 10 standing passengers.

However, Montealto said that his office made it a policy to only allow eight passengers to stand on every Beep’s center isle to ensure the safety of commuters during the duration of their travel from the Cebu City to the IT Park.

In an interview this afternoon, September 28, Labella said that he will remind Beep’s management of the need to comply with provisions of the Land Transportation Code of the Philippines and existing Cebu City traffic ordinances.

He said that Cebu City Transportation Office (CCTO) personnel can have their drivers arrested and issued with citation tickets for their violations.

Labella said that he also ordered the recent transfer of Beep’s designated loading and unloading area from its old location near the City Hall building to the nearby Lapu-Lapu Street because of the obstruction that it has caused in the area. / dcb

CSBT head: More space for passengers at terminal in future