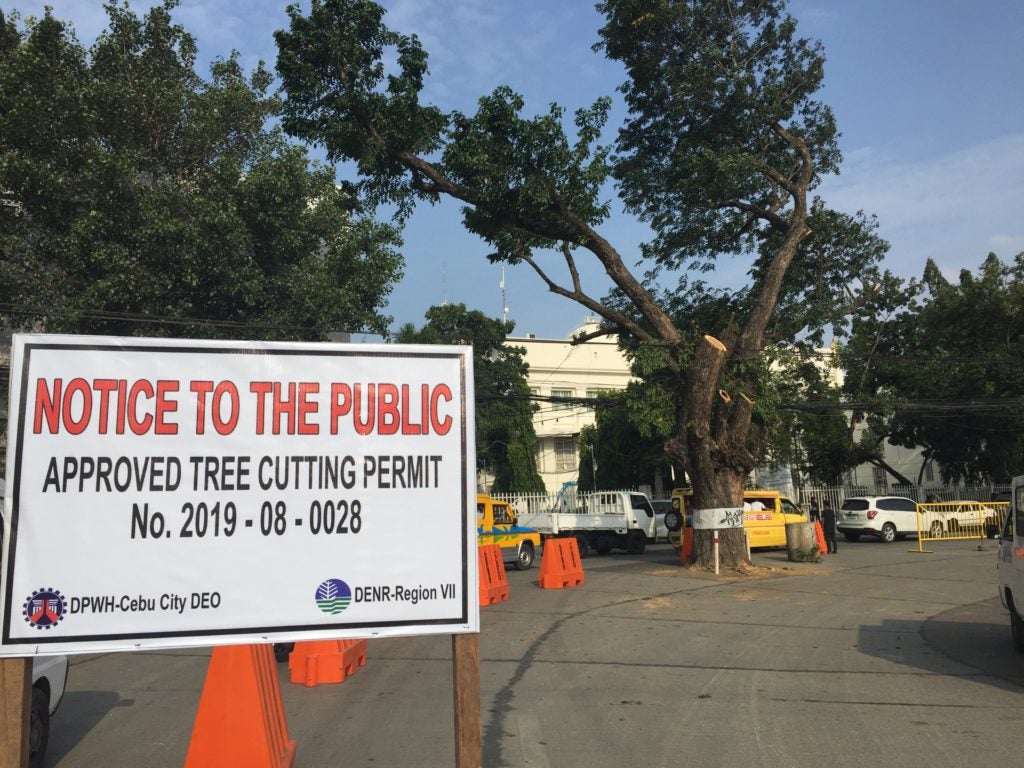 The Department of Public Works and Highways in Central Visayas (DPWH-7) has put up a sign at the Don Gil Garcia Street warning motorists of the cutting of trees. | Delta Letigio

CEBU CITY, Philippines — Environmental lawyer Benjamin Cabrido has asked the appellate court in Cebu City to order the stoppage of the cutting of roadside trees in Cebu.

Cabrido filed before the Court of Appeals in Cebu City on Thursday, October 3, a petition for the issuance of a Writ of Kalikasan and a Temporary Environmental Protection Order (Tepo) against the cutting of roadside trees for road widening projects.

Last September 9, half-a-century-old mahogany trees on Barangay Capitol Site that grow in the middle of Don Gil Garcia Street were cut by personnel from the Department of Public Works and Highways in Central Visayas (DPWH-7) pursuant to the tree cutting permit issued by the Community Environment Natural Resource Office (Cenro) in Cebu City. 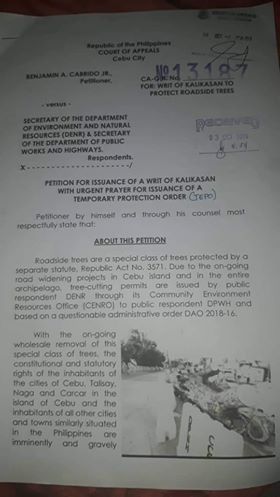 “With the ongoing wholesale removal of this special class of trees, the constitutional and statutory right of the inhabitants of the cities of Cebu, Talisay, Naga and Carcar in the island of Cebu and the inhabitants of all other cities and towns similarly situated in the Philippines are imminently and gravely threatened,” Cabrido’s petition reads.

According to Cabrido, the issuance of the tree cutting permit by Cenro is illegal despite a department order issued by Environment Secretary Roy Cimatu in 2018.

Department Adminsitrative Order 2018-16 delegates the power to issue tree cutting permits to the Cenro, an attached office of the DENR.

Under Republic Act 3571, which pertains to the protection of trees that grow in the roadsides, cutting trees is prohibited unless it is for the enhancement of the scenic view of the area where the trees are planted and growing.

“Cutting or destroying of trees can only be done pursuant to the recommendation of the LGU [local government unit] committee and subsequent approval of the director of the Director of Parks and Wildlife [of the locality],”  the complaint reads.

Cabrido also said that the tree cutting runs contrary to the efforts of the government to combat global warming and other environmental concerns.

if Cabrido’s petition will be granted, the lawyer asked the court to declare DAO 2018-16 as illegal and direct DPWH and DENR to restore the roadside trees that have already been cut./dbs