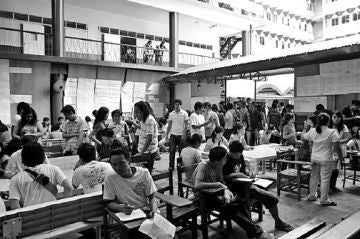 The Cebu City government is now looking for a property that may be used for the planned construction of a city college building that will accommodate city residents who wanted to get a college diploma. | CDN File Photo

CEBU CITY, Philippines — The Cebu City Legal Office has warned the Local School Board (LSB) to be wary of an offer to sell two parcels of land located in the mountain barangay of Buhisan for use in the planned construction of the Cebu City College (CCC) building.

The properties are priced at P5,750 per square meter.

Lawyer Rey Gealon, the city legal officer, told CDN Digital that the discounted price of the two properties is reason to be wary of the offer.

Gealon said that the property owner also failed to present a copy of an order from the Court of the First Instance which authorizes the sale.

“Please consider getting the real intention of the offeror who shows aggressiveness to close the deal,” Gealon said in his letter to the LSB.

Gealon confirmed in a text message to CDN Digital of an offer that the city government received from a Christian Church pastor to sell two parcels of land that are said to be owned by their ministry saying that this was a suitable place for the planned CCC building.

However, he begged off from naming the pastor and his ministry while the city government continues to study his offer.

The pastor wrote Mayor Edgardo Labella on September 2019 to make a formal offer to sell at least 5,000 square meters of land in Barangay Buhisan. He claimed that the two parcels of land were already appraised by City Treasurer’s Office, City Assessor’s Office, and Department of Engineering and Public Works (DEPW).

But Gealon said that the pastor did not specify who were the individuals who conducted the ocular inspection and how they came up with the appraised value of P10,000.  The pastor also did not say the reason for making a offered to sell their lots at a discounted price of only P5,000 per square meters to the city.

After his own review of said offer, Gealon wrote to the LSB to warn them against the lot purchase.

In his letter addressed to Ronald Diola, Mayor Edgardo Labella’s representative to the LSB, Gealon said that the sale or mortgage of properties owned by a religious community is governed by the Corporation Code of the Philippines.

The Code says that in order to dispose, sell, or mortgage a property owned by a religious organization, it has to go to court with the authorization of the community’s highest authority, may it be an archbishop, rabii, or presiding elder. The planned sale will have to be approved by the Court of First Instance.

Gealon said that the pastor failed to present to the city government a copy of the needed court decision, something that the LSB should be wary of.

Still, he assured Cebuanos of Mayor Labella’s effort to prioritize education during his three-year term.

Gealon told CDN Digital that Labella has instructed the LSB to look for viable sites that may be used for the planned construction of a city college and additional public school buildings. But any purchase will have to undergo review by the city legal office, “conscious of the fact that public funds would be utilized.”

“Education being one of the top three agenda of this administration, expect more school buildings to be constructed especially in barangays where there are no public schools. That is to ensure convenience of the students and accessibility of the schools in the barangays, thereby effectively minimizing costs of travel, among others,” said Gealon. / dcb