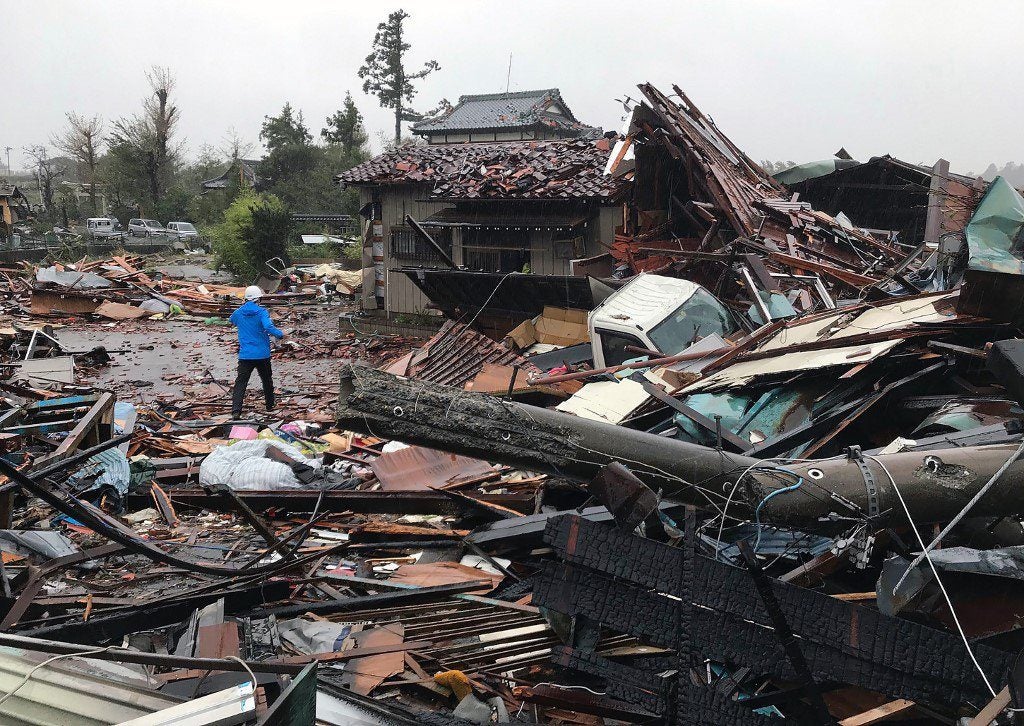 By Sunday morning, the significantly weakened storm had moved back off land, but it left in its wake a trail of destruction and forced Rugby World Cup organizers to cancel another match.

Serious flooding was reported in central Japan’s Nagano, where a burst levee sent swollen waters from the Chikuma river gushing into residential neighborhoods, flooding homes up to the second floor.

“It is not clear how many of those households have been affected,” he added, saying while the river level was no longer on the rise, water was still going higher in residential areas.

Aerial footage showed a row of bullet trains half-submerged in muddy waters at a depot in Nagano.

Overnight Saturday, more than seven million people were placed under non-compulsory evacuation orders, with tens of thousands heeding the call and moving into government shelters to ride out the storm.

Hagibis caused transport chaos over a long holiday weekend in Japan, grounding all flights in the Tokyo region, and forcing the suspension of most trains and many bullet trains serving the capital.

Hagibis smashed into the main Japanese island of Honshu around 7:00 pm Saturday as one of the most violent typhoons in recent years, with wind gusts of up to 216 kilometers per hour.

Well before making landfall, the outer bands of the storm claimed their first victim, a driver whose van was flipped over in the strong gusts.

The second confirmed death was a man in his 60s killed in a landslide north of Tokyo.

Another man in his 60s was also confirmed dead after he was pulled from his flooded home in Kawasaki city, near Tokyo.

“The house was two to three meters under water and the team rescued the man from there” but he was confirmed dead later, local fire department official Kiichi Hayakawa told AFP.

A fourth person, a woman, was in “cardio-respiratory” arrest — a term often used in Japan before an official doctor certifies death — after being pulled from a home engulfed by a landslide in Samigahara, southwest of Tokyo, local media said.

National broadcaster NHK said at least 99 people had been injured and 17 were missing after the storm, including several swept away in flood waters.

While Hagibis packed intense winds that damaged homes in Chiba, east of Tokyo, even before it hit land, it was the hours of torrential rain that prompted the Japanese Meteorological Agency to issue its highest-level emergency warning, advising people to seek shelter.

“Unprecedented heavy rain has been seen in cities, towns and villages for which the emergency warning was issued,” JMA forecaster Yasushi Kajiwara told reporters.

“It is important to take action that can help save your lives.”

Across large swathes of the Tokyo region and central Japan, rivers burst their banks and authorities implemented emergency discharges from dams that had reached maximum capacity.

The storm wreaked havoc even before arriving in Japan, forcing the delay of Japanese Grand Prix qualifiers and the cancellation of two Saturday Rugby World Cup matches.

On Sunday morning, organizers said they had been forced to cancel a third fixture — Namibia-Canada — but gave the go-ahead to two others and were weighing up the fourth match scheduled, the crunch Japan-Scotland game.

“We were left with no option but to cancel the match on safety grounds,” said tournament director Alan Gilpin.

The cancellation is a blow for the northern town of Kamaishi, which was nearly wiped off the map by the 2011 tsunami disaster and has participated as a host city in a show of its recovery.

All eyes are now on whether the do-or-die match between hosts Japan and Scotland in Yokohama will go ahead, with the Scots threatening legal action if it is prevented from playing the game and automatically eliminated.