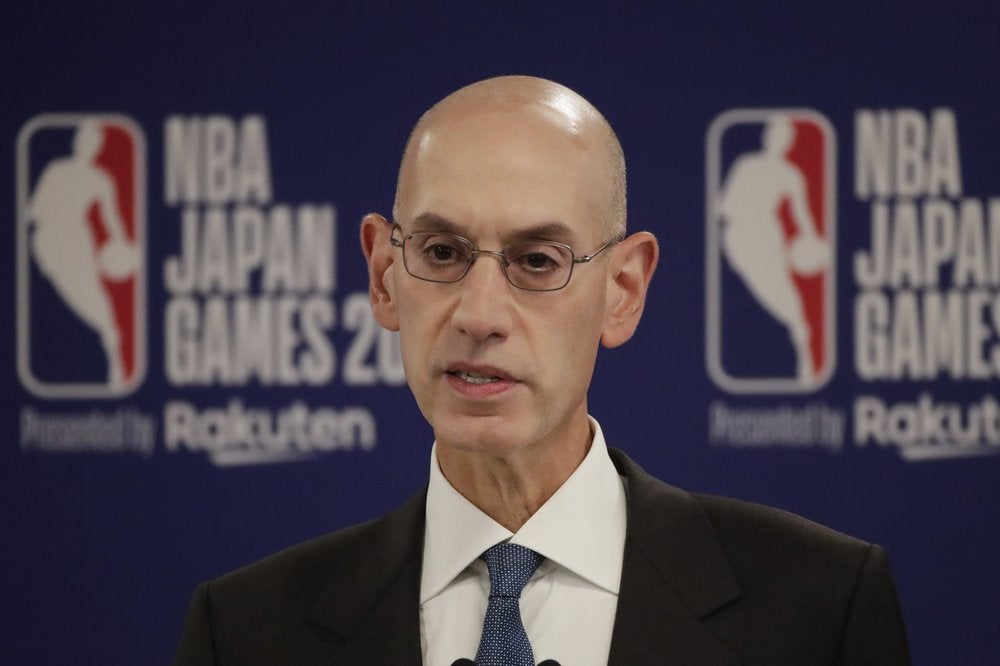 In this Oct. 8, 2019 file photo, NBA Commissioner Adam Silver speaks at a news conference before an NBA preseason basketball game between the Houston Rockets and the Toronto Raptors in Saitama, near Tokyo. When major corporations have angered Chinese authorities in recent years, the playbook calls for one thing: an apology. The NBA, with billions at stake, has resisted that for now, though some experts wonder if such a move is inevitable. | AP Photo/Jae C. Hong

Silver also said that the league is already feeling “substantial” financial losses because of the Chinese reaction to Morey’s deleted tweet.

“Obviously, we made clear that we were being asked to fire him by the Chinese government, by the parties we dealt with, government and business,” Silver said Thursday (Friday morning, Philippine time) during an appearance at the Time 100 Health Summit in New York. “We said, ‘There’s no chance that’s happening. There’s no chance we’ll even discipline him.’”

Silver also said he isn’t sure what will happen to the NBA’s relationship with China, which has been growing steadily over the last three decades.

“I felt we had made enormous progress in terms of building cultural exchanges with the Chinese people,” Silver said. “Again, I have regret that much of that was lost. And I’m not even sure where we’ll go from here.”

The league and LeBron James, one of its biggest stars, have been heavily criticized by some U.S. lawmakers for the perception that they caved to the Chinese regime. Morey has not been rebuked publicly by the league, and Silver has said that the league will support his freedom of expression.

The Rockets were of massive interest in China, largely because of Yao Ming — the Chinese star who spent his entire NBA career in Houston. Yao is now the president of the Chinese Basketball Association, which has suspended its ties to the Rockets because of the tweet.

Morey has not commented publicly since a pair of tweets on Oct. 6 attempting to clarify his position.

“I understand there is a point of view from some that we shouldn’t be in business at all in China, and I’d say from an intellectual standpoint, that’s fair — not getting into whether the tweet or the response to it,” Silver said. “But if people believe that we shouldn’t be engaged in commerce in China or frankly in other places in the world … I, at some point, look to the American government.

“We’re in the middle of negotiating a trade agreement,” Silver continued. “Many multinational corporations do trade extensively with China. And if that’s ultimately how our government feels we should be dealing with China, again, we are a U.S. company.”

Chinese state broadcaster CCTV did not air the two NBA preseason games between the Los Angeles Lakers and Brooklyn Nets last week. Tencent, which has a $1.5 billion deal to stream NBA games in China over the next five years, has also stopped showing Rockets games but has not totally dropped all NBA content.

“The losses have already been substantial,” Silver said. “Our games are not back on the air in China, as we speak, and we’ll see what happens next.”

Silver was at the summit to discuss the league’s deeper commitment to ensuring players and employees are taking care of their mental health, something that has been a growing topic in the NBA in recent years — particularly with the acknowledgment of top players like San Antonio’s DeMar DeRozan and Cleveland’s Kevin Love that they struggle with certain issues.

Silver also addressed how social media can make matters more difficult for those who engage.

“Social media, it seems pretty clear, is raising the anxiety level and stress level among our young people,” Silver said. “There’s a lot of hate speech out there. There’s stress to be included, there’s emotional issues about being left out of groups. And then compound that with NBA players when there’s in some cases millions and millions of seemingly anonymous people taking shots at them. And while the advice often is ‘just don’t read it,’ it’s awfully hard.”