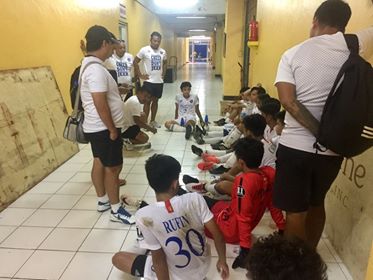 The Sacred Heart School-Ateneo de Cebu (SHS-AdC) Magis Eagles in a discussion with the coaches during the halftime of one of their matches in the 2019 Cesafi Football HS tournament. |CDN Digital Photo/ Mars G. Alison

But the Magis Eagles are not about to concede yet.

The Magis Eagles are currently at the fourth spot with six points following its win-draw-loss record of 2-0-3.

With this card, Ateneo has put themselves in a must win situation wherein they have three more games left.

“We still have a chance of advancing to the top 2 depending on our results. We still hope that we will be able to qualify,” said Ateneo head coach Oliver “Bingbing” Colina.

USC-BED is currently in third place with seven points on a 2-1-3 card.

Colina will be banking on his team’s determination to win as they haven’t had proper training en route to this weekend’s matches.

“We don’t actually have any concrete game plan because this week we didn’t have proper training because its is exam week of the senior high, thus we were not able to form the team,” said Colina. 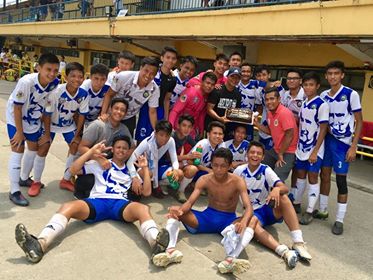 The Don Bosco Technical College (DBTC) is vying for the top spot in the secondary division of the ongoing 19th Cesafi men’s football tournament. | Contributed Photo

The other match will have Don Bosco Technical College (DBTC) Greywolves vying for the top spot as they go up against Sisters of Mary Schools (SMS) Boystown.

The Greywolves are in the second spot behind the University of San Jose Recoletos (USJ-R) Baby Jaguars.

SMS Boystown, for its part, is hoping to clinch its first win in the tournament. It is currently resting at the bottom with no points on a 0-0-5 card./elb

Read Next
LOOK: Photos from the street dancing of Negros Oriental’s Buglasan Festival