Labella: Cebu City is safe; ambush-slay of Clarin mayor not a cause for alarm 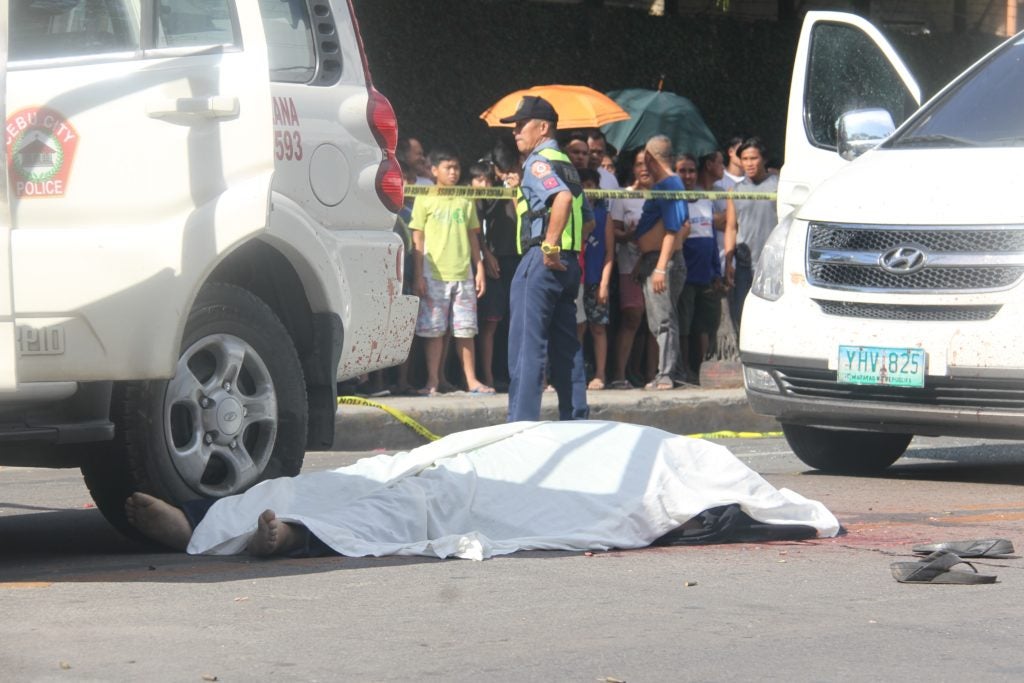 The body of Clarin Mayor David Navarro is covered with a blanket while police process the crime scene along M. Velez St., Cebu City where he was ambushed and killed while in police custody on Oct. 25, 2019. | Raul Constantine Labrador

Labella told CDN Digital by phone on Saturday that Navarro’s death had many factors to be considered including his political career, his alleged connections to illegal drugs and robbery gangs, and other possible motives.

He said Navarro’s circumstance was different from the ordinary people, who remain to be safe within the confines of Cebu City.

He noted that many of the deaths that occurred in Cebu were related to illegal drugs.

“As long as you are a law-abiding citizen of the country, you are not involved in the illegal drug trade, there is nothing to worry. Cebu City is safe,” said Labella.

Labella, however, said he wants to know the circumstances leading to Navarro’s killing.

He said has ordered the Cebu City Police Office (CCPO) to thoroughly investigate the incident and provide him a copy of the report on how and why Navarro was killed while being escorted by the police to  the prosecutor’s office.

Despite the inability of the police escorts to protect Clarin’s chief executive during the ambush, Labella said that the city’s police are competent and he trusts them to keep the peace in the city.

Labella said there was no reason to doubt the police because they were able to provide the necessary security to protect Navarro, the way every other suspect, whether high profile or not, should be protected.

Yet, Labella said he will be asking Police Colonel Gemma Vinluan, the director of the Cebu City Police Office (CCPO), to still investigate  the possible lapses of the police officers in the convoy, as this is still part of the whole crime incident.

Labella said that as a fellow chief executive, he will be sending his condolences to the family of Navarro.

The body of Mayor Navarro was brought to the Cebu City port area and will be transported to his hometown this evening, Saturday, October 26, via an interland-island vessel.

Navarro, who was in the city supposedly for preside over an executive-legislative agenda meeting of his town, was arrested in the evening of October 24 for mauling a massage therapist.

The mayor has been linked to the illegal drugs trade and was number 31 in President Rodrigo Duterte’s list of narco-politicians. The mayor, who has been lying low following repeated attempts to clear his name,  instead got himself entangled with the law for the mauling incident inside a massage establishment in uptown Cebu City, an incident that was caught with a CCTV camera and that which led to his arrest.

Read more: Who is slain Clarin Mayor Navarro and why was he in Cebu City

He was being escorted by a group of Cebu City policemen for his inquest proceedings at the city’s prosecutor’s office when waylaid by a group of around ten armed men, who dragged him out of the vehicle before repeatedly shooting him to death.

Four other persons, including the police chief of Clarin who was with the mayor, were injured in the ambush./elb