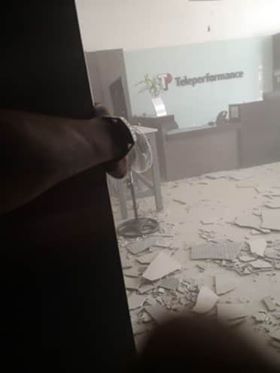 The damaged section of the Teleforperformance office in Cagayan de Oro City after a magnitude 6.4 earthquake hit Mindanao at 9:04 a.m. on Oct. 29, 2019. The quake, while its epicenter was located 26 km from Tulunan town Cotabato City, was felt at Intensity 6 in Cagayan de Oro City. |CDND Photo/Froilan Gallardo

Police Staff Sergeant Archie Estrella of the Koronadal City Police Station said Nestor Narciso, a retired government worker, was helping in the construction of the Marbel Evangelical Church in Purok Bagong Sikat when the earthquake struck at 9:04 a.m.

Estrella said Narciso was crushed by a falling concrete wall and was declared dead on arrival at the South Cotabato provincial hospital in Koronadal City.

“We confirmed that Narciso was pinned to death after a concrete wall fell on him,” Estrella said.

Near the epicenter of the earthquake, Several students of the Daig Elementary School in Tulunan town,  Cotabato were injured and were rushed to various hospitals.

The Philippine Institute of Volcanology and Seismology (Phivolcs) reported that the epicenter of the earthquake, which was tectonic in origin,  was recorded some 26 kilometers northeast of Tulunan town, at a depth of eight kilometers.

This was the second strong quake to hit Tulunan this month.

In Cagayan de Oro City, where the quake was felt at Intensity 6,  Information Officer Maricel Rivera Casino said the City Disaster Risk Reduction Management Office (CDRRMO) which operates a seismograph, recorded it at magnitude 4 for the city and adjoining province of Misamis Oriental.

Casino said classes in all schools are suspended in Cagayan de Oro as city officials and owners check school buildings for damages.

She said one person was brought to the hospital after the ceiling of the Teleperformance, a business process outsourcing firm at the Ayala Centrio, cracked under the extreme pressure of the quake.

In Davao City, where the tremblor was also felt at Intensity 6,   Mayor Sara Duterte also suspended classes in all levels, as the quake might have caused structural and electrical damage to buildings and houses.

“If they find building defects that are dangerous and need repair, they should immediately condemn the area and not allow students to use the same,” Duterte said.

The quake also damaged facades of government buildings and in one hospital in Kidapawan City, which forced patients to seek open grounds for safety./elb