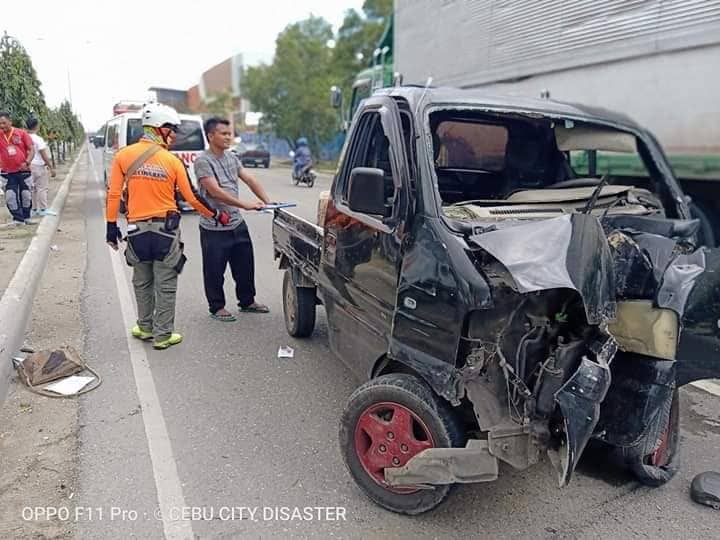 In this photo provided by the Cebu City Disaster Risk Reduction and Management Office, a multicab is scene with a wrecked front end after it hit a post at the Cebu South Coastal Road at the South Road Properties on Wednesday, October 30, 2019.

CEBU CITY, Philippines—A driver and his passenger were injured in a road mishap at the Cebu South Coastal Road of the South Road Properties (SRP) at past 11 a.m. on Wednesday, October 30, 2019.

According to Harold Alcontin, the head of the Cebu City Disaster Risk Reduction and Management Office (CDRRMO), the victims, on board a black pick-up type multicab, were traversing the southbound lane when the driver saw a large wooden debris on the road.

Alcontin said the debris may have fallen off from a truck beforehand and was left unnoticed by the driver of the truck.

The driver of the multicab swerved to avoid the debris but then hit a lightpost on the center island. The multicab was thrown off to the northbound lane upon impact.

Alcontin said the driver and the passenger were injured but none of them were in critical condition.

They were brought to the Cebu City Medical Center for immediate medical attention.

Alcontin said they now referred the affected post to the SRP management for assessment. If the post is proven dangerous, CDRRMO will take the post down and refer for its replacement.

The CDRRMO has yet to release the names of the victims as of this posting. /bmjo

Read Next
PDEA-7 uproots P8.6M worth of marijuana plants from Balamban plantation